The clustered settlements of the Eastern Desert During the prehistoric times, the Eastern Jordanian Desert was not the desperately isolated and marginal black land that we know today. Those regions were rich in water, vegetation and animals, all what is needed for attracting human populations, not only hunters but also breeders.

The Eastern Desert is partly covered by the lava flows descending from the volcano Jabal Druze (or Jabal Al Arab) in the Southern Syria till the plains of Saudi Arabia. This huge basalt zone is called Harret Es-Sham. 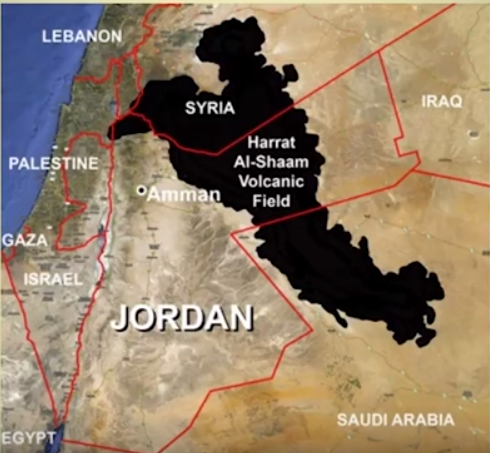 Those basalt zones are called harra and justify the name of "Black Desert" that we commonly give to the Eastern Desert, in contrast with the hamad, the sandy clear brown desert. The Harra is covered with basalt boulders of different size that make crossing extremely difficult. This is maybe the main reason why the archaeological exploration of those zones started only recently.

The harra is sprinkled with mudflat areas called qe'an (sg. qa'a), sediment pockets or valleys forming the hydrographic system of the harra. Those flat areas collect the rainfall during winter and are favorable to vegetation seasonal development. In the more humid Epipaleolithic and Neolithic, the mudflats were seasonal lakes and generous grasslands. 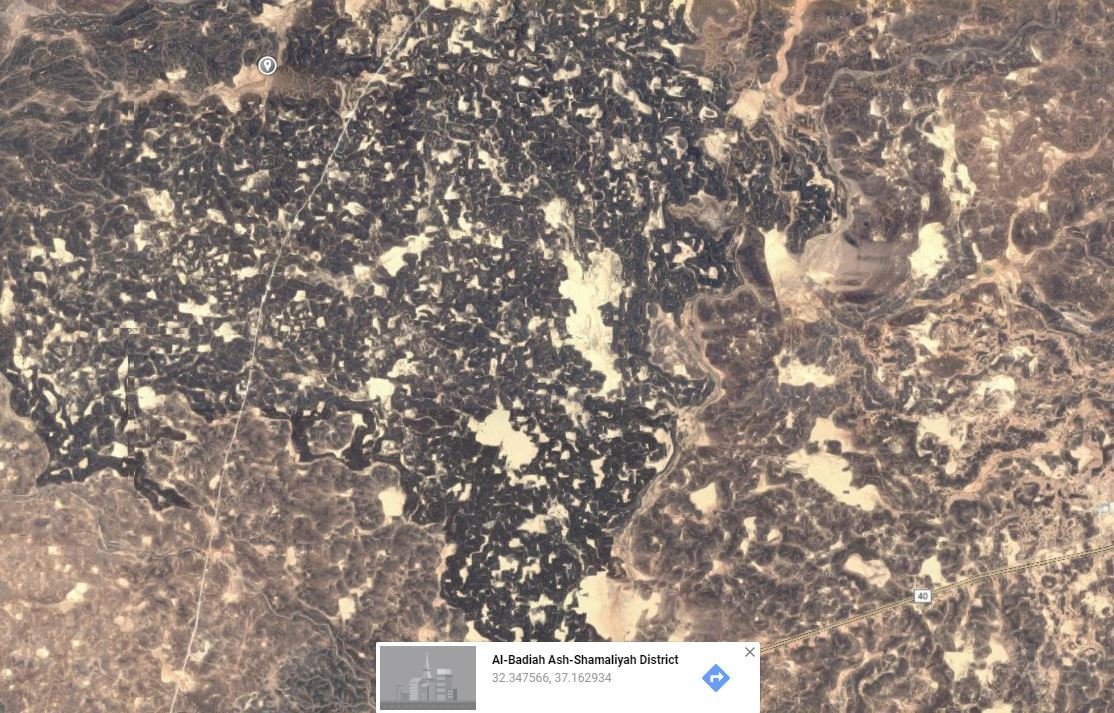 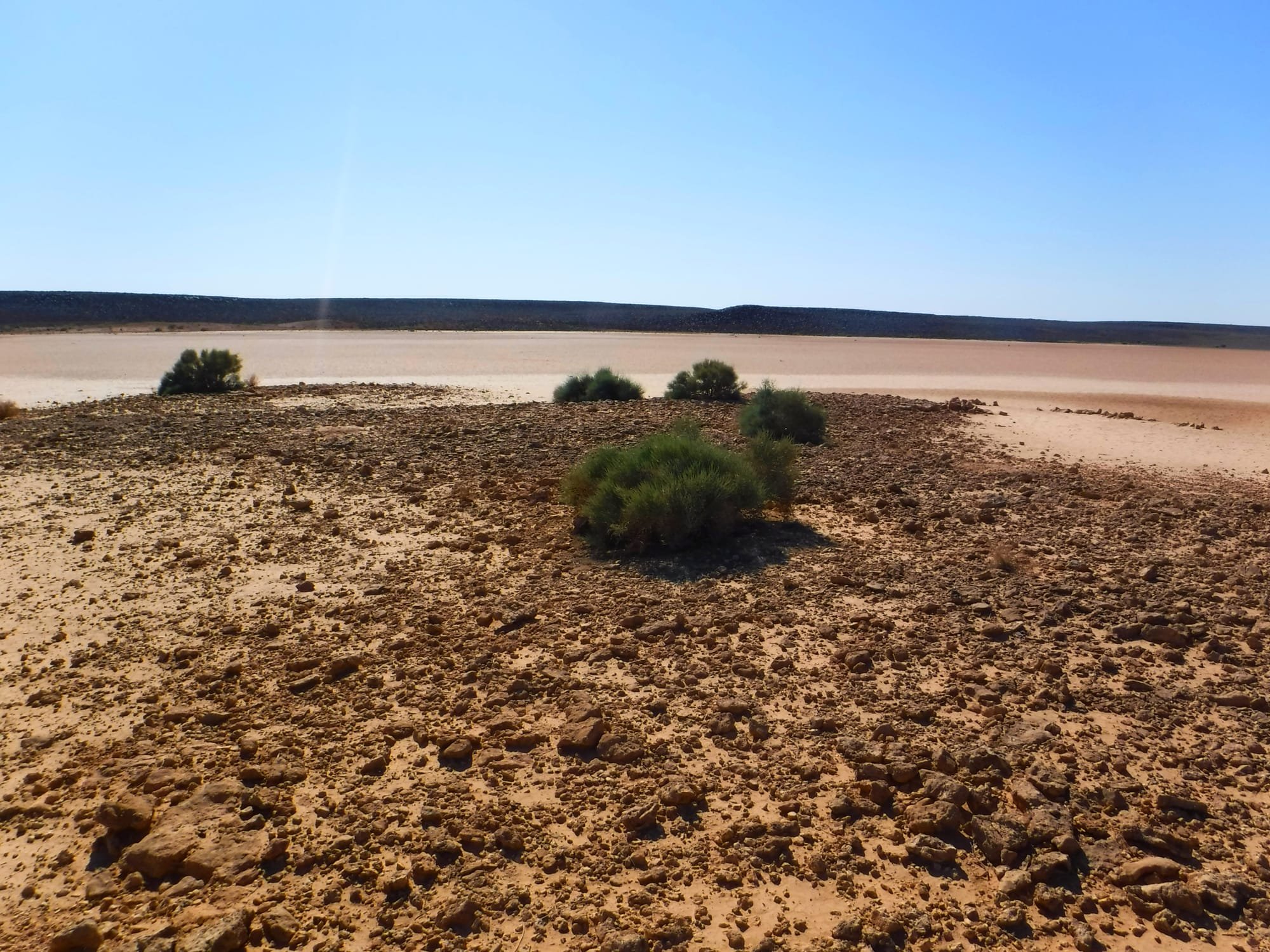 By analyzing the structure of the soils, archaeologists discovered that the lowest level were more absorbent to water: what is now a sterile area was probably be fertile. Keeping the water, the soil could be a source of humidity for a long time after the rainfalls. A soil rich in moisture created a very different landscape. A dense vegetation was hosting a lot of wild animals, as attested on the petroglyphs. Pollen analyzes and fire remains show the presence of Oaks, Pines, Juniperus, Ostrya and Ulmus, as well as of Genus Lemna (an aquatic plant) and Cattail. This last plant could represent an interesting resource beside its nutritious value, as it can be used for huts roofing, basketry and mats. What we called now the Black Desert had a totally different appearance at the Neolithic. Climatic changes occurring around 2500 - 2000 BC, together with cattle over grazing and the damages caused by the cattle hooves, have finally changed those greening areas to a hard desert.

Up to 7000 BC, people of the Eastern Desert lived as hunters and gatherers, following gazelles herds and moving frequently from a camp to another. An impressive shifting occurs by 6600 BC: the population of the area suddenly grows to perhaps ten to twenty times what it was a few hundred years earlier, hunting methods change and we see appearing permanent settlements in shape of huts clusters, where people spend a relative long time over the year. Beside hunting activities, we see clearly the evidence of sheep and goats husbandry. The remains of this civilization have been detected in the 20th century by the airline pilots while flying between Cairo and Baghdad. Countless structures can be observed on the satellite imagery, over the hills, along the wadies, on the periphery of the mudflats... Archaeology is currently undergoing a revolution, as not only satellite imagery but also drones allows to survey the ground at a scale and resolution with an unprecedented accuracy. 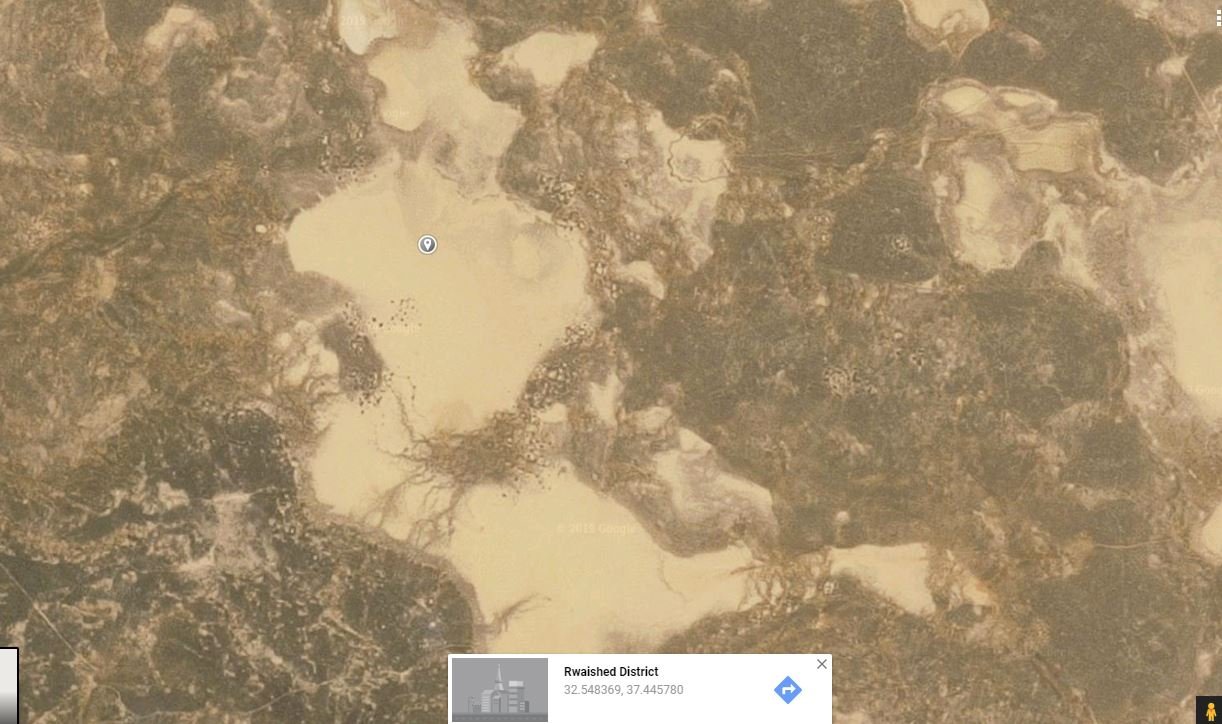 The settlements generally consist in grouped small huts and enclosures. The huts are mainly rounded, but we can find also some roughly squared. The dwellers raise cattle and, in many cases, animal pens are contiguous to the huts. It will need years to survey the huge domain of this civilization extending between 7000 and 5000 BC, the researches are still at their beginning. Area of Jabal Qurma (photos below) is investigated since some years.

The dwellers were shepherds, but also hunters. Among the bones remains that we found in their habitats, only 10% come from domesticated goats or sheep. The 90% come from gazelles. Hunting practices allowed them to preserve the cattle resource, that should have been use for something else than meat supply.

Generally, the flat tops of the mesas are free from clustered settlements, but contains surface lithic deposits dating to the PPNB and PPNC or earlier periods,  as well as tombs of Chalcolithic and Early Bronze Age that were, for some of them, subject to a reuse during the Safaitic period (2nd to 4th AD). The tops contain also enclosures that look like animals' pens, with some little huts that maybe served of shelters for the shepherds. The slopes of the mesas are covered with hundreds of clustered domestic buildings (photo below) with a surprising density, mostly circular, between 2 to 10 m in diameter, built with large slabs. The height of the huts wall can reach till 3 m. The builders took advantage of a local particularity of the basalt that fractures in rectangular slabs for erecting the walls. In the early step of the surveys, those collapsed structures appears to be funerary buildings similar to the nawamis (Ar. sg. namus), a kind of circular tombs known in the Sinai. However, the nawamis are not attested before the 4th millennium BC and the first structures excavated around the mesas refer clearly to the Late Neolithic (7th and 6th millennia BC). If it would need years to have a clear idea about the dating and the function of the different structures that we found on the slopes of the mesas, it is striking to observe that the area of mesas and Wisad Pools attest of a particularly intense occupation between 6900 and 5000 BC.

Namus tomb in the Sinai. Their structure could eventually be similar to the huts found at the Wisad Pool and Wadi Qattafi 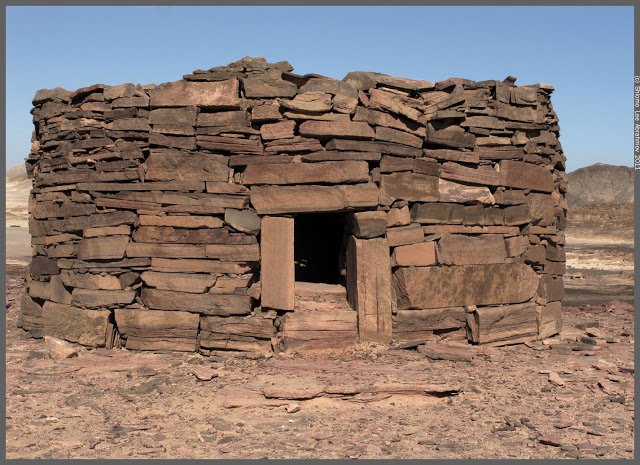 The sudden explosion of population of the Eastern Desert that we can now plus or less identify is not yet very well understood. The ongoing surveys start decoding the complexity of this period and recognizing that the Late Neolithic harra population is not homogeneous. They recognize variations in the architectures and in the lifestyle and in the material. A part of the inhabitants already integrated the pastoralism, while other not. Scholars do not yet understand very well what were the influences mechanisms among those populations, but one hypothesis says that the increase of population in the Eastern Desert matches with a rainfall rarefaction observed around the Dead Sea basin. This climatic modification would have pushed the pastoral population of the western Plateau to migrate, at least on seasonal basis, to the rich Eastern grassland. We may also suppose that the migrants introduced in those area some new technologies as the pottery. Moreover, recent researches put in evidence a cultural link between some objects found in the huts and the Mesopotamian civilizations, suggesting that it existed contacts between the populations settled in those areas and Mesopotamia, or even maybe that some settlers may have come from Mesopotamia.

Peter Akkermans (ed.): Landscapes Of Survival, The Archaeology and Epigraphy of Jordan's North-Eastern Desert and Beyond, SidestonePress 2020. https://www.academia.edu/44762065/LANDSCAPES_OF_SURVIVAL_The_Archaeology_and_Epigraphy_of_Jordans_North_Eastern_Desert_and_Beyond?fbclid=IwAR3x_zFOktxESMLOMGe8Pj8i_KEdySnD42cWZMTNcF2XB8v734JxgAbv2f8

Was Jordan's Black Desert green during the Late Neolithic? https://www.youtube.com/watch?v=Zg2zHK3GfiQ