In 2018, archaeologist discovered on the site of Shubayqa 1, in the Northeastern Jordan Desert, a fire place containing charred crumbs of a bread-like product. Surprisingly, this site belongs to the very early Natufian civilization at the end of the Epi-Paleolithic period and the remains date back to 12 500 BC. Till then, it was appearing as an evidence that bread making was subsequent to the proto-agriculture. But this discovery is pushing back at least 4000 years earlier the process of bread making. The inhabitants of Shubayqa where hunter-gatherer. 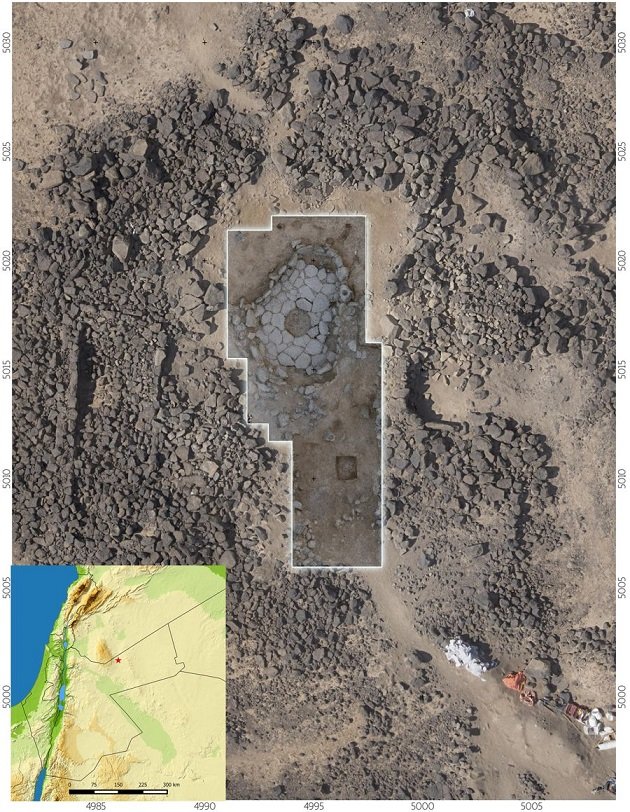 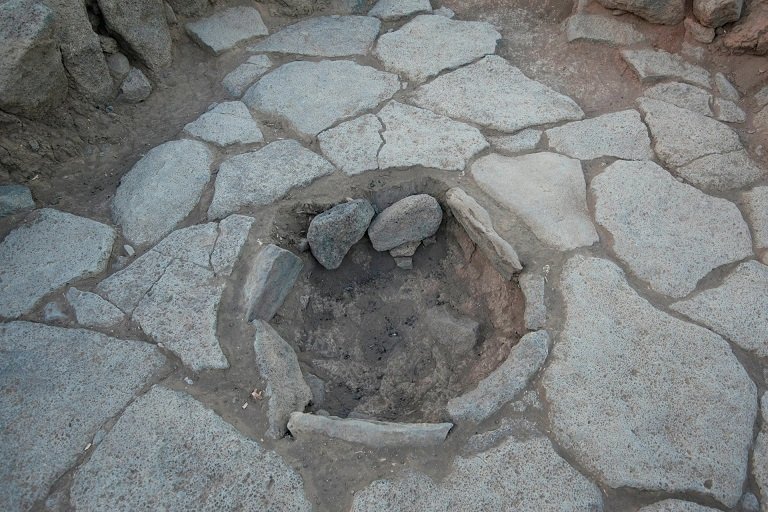 The Shubayqa 1 fireplace is a large circular hole (about 1 m in diameter) build in basalt stone and integrated in a building structure. The contents of the fireplace were left intact after its last use and covered by deposit, a situation which is particularly interesting for archaeologists. The analysis of the charred crumbs revealed that the bread was made of wild cereals and roots. It was likely an unleavened flat bread. The absence of coarse elements in the remains suggest that the floor was thinly milled.

The typology and baking technique of the Shubayqa oven is not yet documented. The Shubayqa discovery is more interesting given that the ovens commonly excavated are tannurs (Arabic pl. tananir) , a cylindrical and lightly conic clay oven, that could not be possible in the context of the Eastern Desert due to the lack of adapted clay. Tannurs or tananir are well known to the archaeologists as we find them from the Neolithic period in all the geographical regions of ancient Near East. 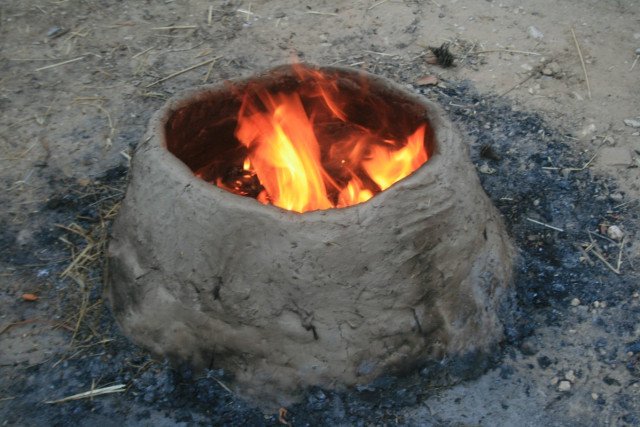 The discovery a bakery full of tananir dating back to the middle of the 3rd millennium BC on the site of Tell Beydar (north-eastern Syria) is a good example: 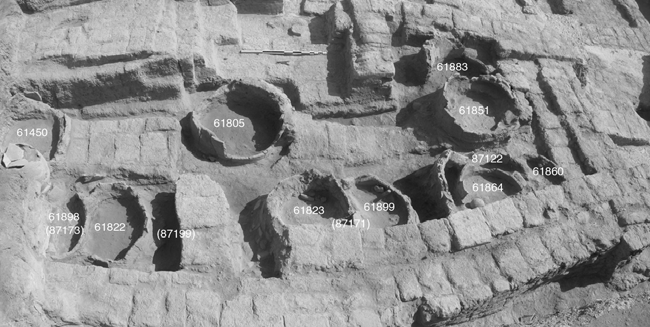 The original tannur is a rather small cylindrical structure. The flat bread loaves are leaned directly to the oven's wall until they begin to come away from it when backed. 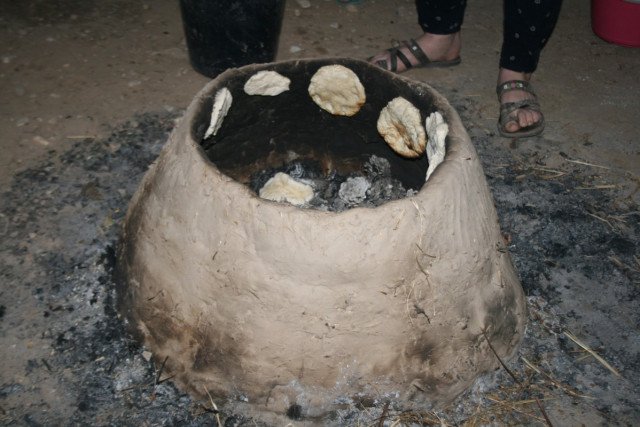 The geographical domain of the tannur is extremely extended, from Palestine to Iran and Turkey. Therefore, we find a large rank of variations in the sizes and shapes. Larger models will request a small opening in the basis for lightening the fire and for the air circulation. In Jordan, it is infrequent to find tananir in the domestic sphere. However, we see in some popular bakeries a large version of this oven embedded in a masonry along a wall or as an independent structure mounted on wheels. The below example is a tannur functioning with gas fuel, with a gas eye placed in the bottom of the oven. The internal walls are of iron.

The bread produced in the tannur is a large bubbled round bread, called mashrouh in Jordan. (video here below in Lebanon)

In Jordan, the tabun oven (Arabic pl. tawabin)  is much more prevalent especially in the North of the country. Historically, the first attestation of tawabin date back to the 7th century AD. It means that it is much more recent than the tannur. The tabun is a low dome-shaped clay oven with a large opening on the side. The fire is lighted in the opening and, maintained at a constant temperature, heats stones placed in the bottom of the structure. Contrary to the tannur technique,  the tabun bread is baked on the heated stones in the bottom of the structure and not on the walls. The bread produced in the tabun is a round flat cake of small size but relatively thick. 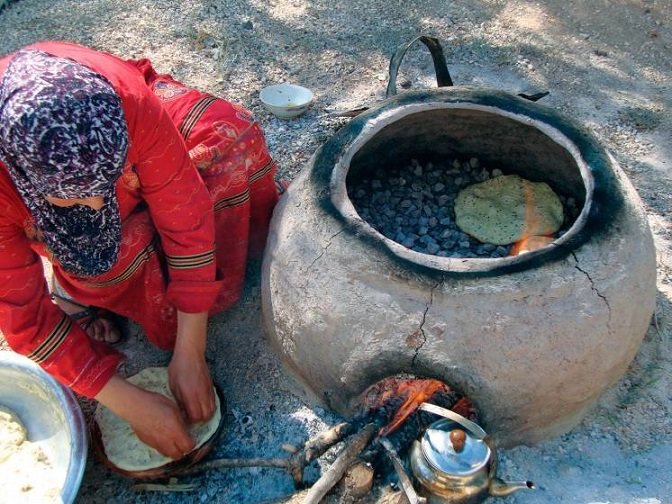 The tabun has a large top opening that we can cover with a lid. The side opening can also eventually be closed in order to keep a maximum of heat inside the oven. Tawabin are generally large. We can find them sometimes half-buried in the ground or covered by the remains of ashes from the previous uses. We can find variations with for example an intermediate level were dishes to be baked can be deposited. And also some fantasies...

Tawabin are made of a mix of clay, straw, little gravels, to which we sometimes add goat hair and eventually goat dung.

The construction process starts with a circular basis on which walls are progressively erected. The process takes several days as it is important to let the previous layer dry before adding a new one. 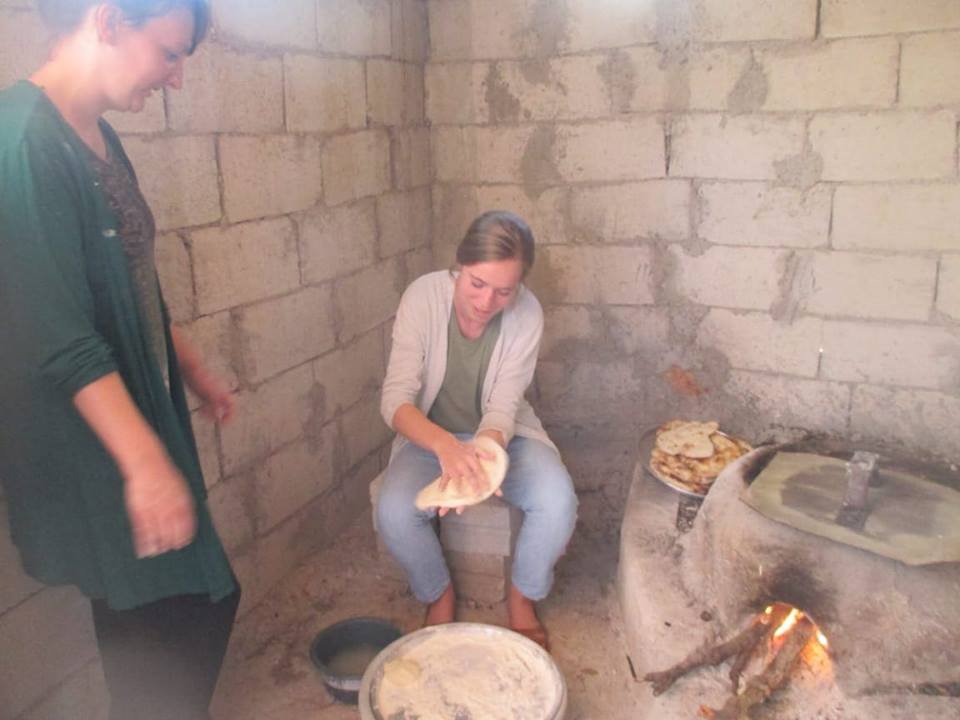 Tawabin ovens are placed inside a small external construction especially built for this purpose, keeping the structure as well as the fuel (generally wood) sheltered from rain and wind. Baking bread in a tabun is the work of the women. Many rural families still use the tabun as a complement to the modern gas oven. Baking in a tabun is an intensive work, for keeping the oven at the right and constant temperature and staying in the smoky tiny room. This system is also demanding in fuel. Normally, the housewife will take the opportunity of the heated up oven to bake other dishes placed in large trays.

The saj is another type of oven in use in the Bedouin societies. It consists in a dome of metal placed over the fire. Easily portable, the saj is adapted to the nomad or semi-nomad lifestyle. Eventually, the Bedouins also bake the bread directly in the hot embers (which is the oldest way to bake bread in the mankind history)

We find also gas or electricity saj models, and an adapted large model for mass production in popular bakeries. Traditionally, as the Bedouin do not have table,  the bread maker extends the dough ball by passing it from an arm to the other in a circular movement. The dough becomes large and extremely thin, and can be bake in less than one minute on the saj. In bakeries, we rather use a round shaped cushion to extend the dough on it.

The furn (Arabic pl. afran) is the most common bakery oven and foreseen for the mass production of bread. It took the name (lat. furnus)  as well as its typology from the Western Mediterranean traditional oven, where the food (bread, pizza or other dishes...) are cooked on a large floor next to the fuel. When all houses were not yet equipped with a gas oven, afran could be used as public ovens where neighbors could deposit their dishes to be baked. Nowadays, afran use gas fuel. 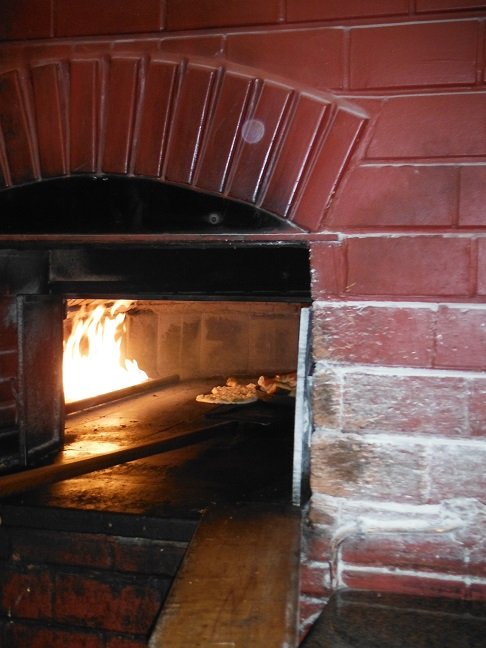 Bread is since the Neolithic times the most elementary aliment for the mankind and still hold a central position in the oriental cuisine, whether basic or elaborated. Bread is even used as an edible ustensil for eating hommos, foul, moutabal and their variants. It is also the basis to all kind of sandwiches, as for example the shawarma. It is also used as a bottom board for dishes as musakhan and the Jordanian traditional mansaf....