The Dolmens, an Endangered Heritage in Jordan 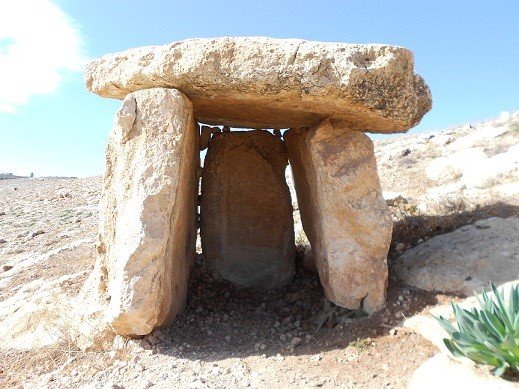 Dolmens are megalithic monuments related to funeral rituals. In the Levant we find a line extending from the Caucasus down to Yemen on which these constructions are regularly found. This line crosses Jordan from north to south, roughly along the hills of Transjordan's plateau that overlooks the Rift valley. Jordan has, or had in the past, the most important concentration of dolmens in the Levant, mainly concentrated in the north-west region. 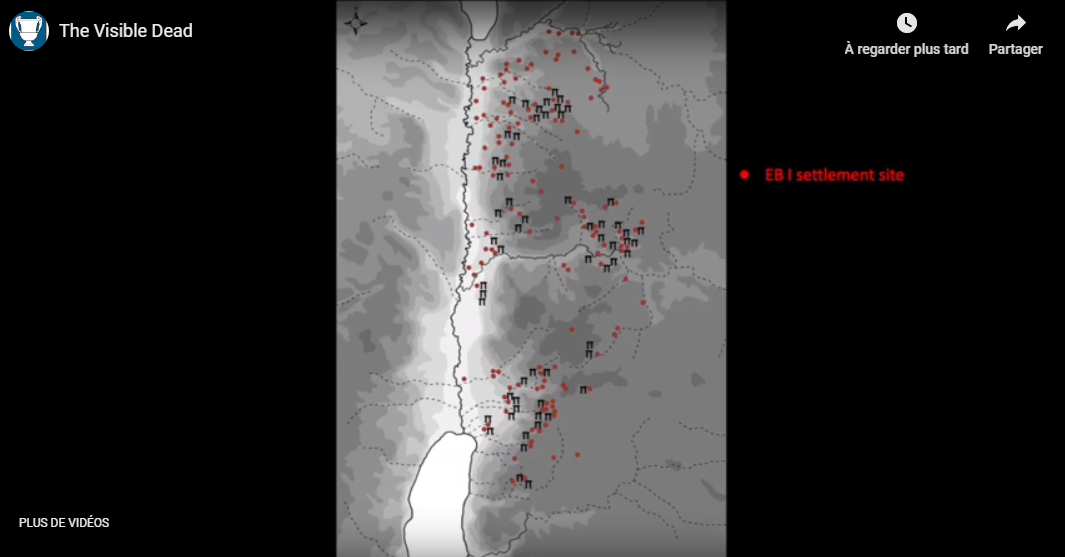 In general, dolmens in Jordan date back to a period covering the Early Bronze Age till the Middle Bronze Age (around 3600 – 1500 BC). But some of them seem to have been erected earlier, during the Late Chalcolithic (around 4000 BC). The materials helping in the dolmens dating is poor: potsherds and flint found in the immediate vicinity of the monuments. While an hypothesis was associating dolmens with nomadic human groups supposed to come to the fertile hills for trade purposes, recent studies show that dolmen fields seem rather connected with Early Bronze Age settlements. The size of the dolmen fields could even be proportional to the size of the related settlements, which leads us to suppose that dolmens were build by villager societies.

Dolmens found in Jordan consist generally of a structure of three megaliths resting on a basement slab and covered with a top slab. They are usually open at the front, but some specimen have a front slab with a window shaped opening that could eventually be closed by a square carved stone. 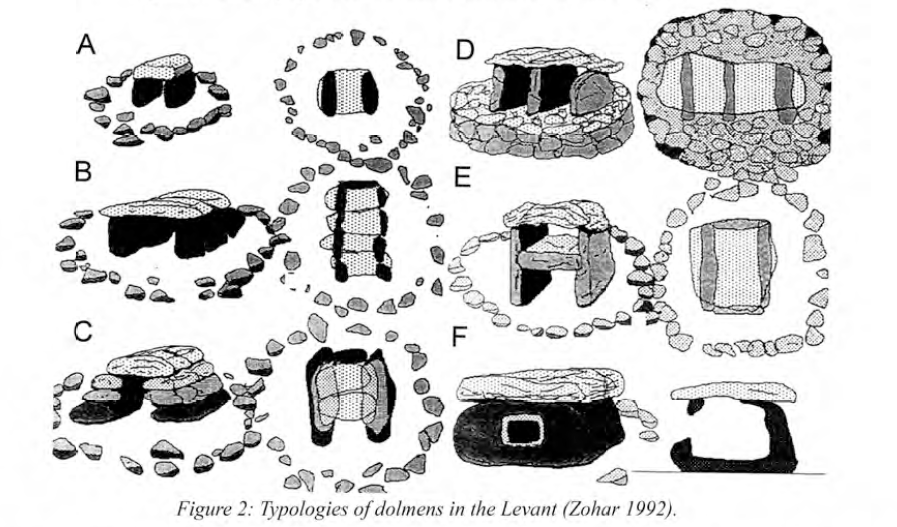 A. Polcaro, ref. below

The base of the dolmen is usually standing on the bedrock itself, but can also be erected on a cairn, a circular or elliptical base made of a cluster of smaller stones. It is difficult to determine whether the function of this base is to support the building or to define a worship space. The visibility of such monuments exposed them to looting so that it is exceptional to find material or human remains and dolmens keep a part of mystery. Funerary materials have sometimes been found in or around the dolmens, but those findings are quite rare. However, an exceptional discovery under the dolmen of Tell al-Umayri, in Madaba plain, revealed not less than 20 disjointed skeletons and a lot of pottery, flints, beads and pearls. This could indicate that some dolmens may have been mass graves reused over generations, in the same way that the shaft-and-chamber tombs of Bab El Dhra. 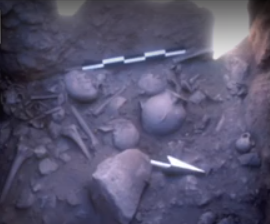 The absence of funerary material that we notice quite often can not be attributed only to looters. It may also be linked to the ritual and symbolic functions of the dolmens. A hypothesis suggests that bones and materials were settled during the first burial and then withdrawn from the monument. It is also believed that the upper slab may be used to receive offerings or sacrifices, whether there was a grave under the monument or not. It is also possible that some of these megalithic constructions were erected to show the power of a family. We sometimes find dolmens interconnected by a line of stone, which could mean that they belong to the same family group.

Murayghat, line of stones along a serie of dolmens 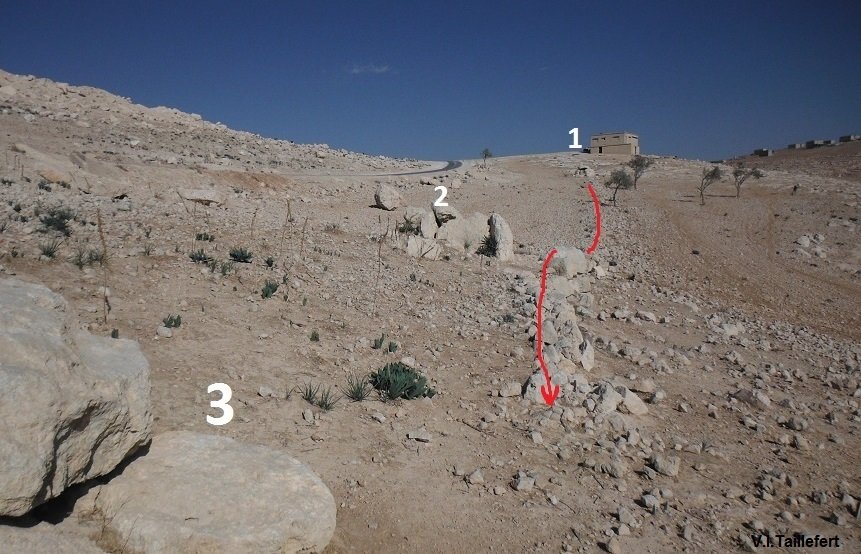 What is sure however is that building process of dolmen was requesting mutual cooperation and social cohesion.  On the dolmens field in the Wadi Rayyan, traces of quarry works have been discovered as well as a slab partly extracted from the bedrock, in the direct proximity of erected dolmens. The slabs where probably pulled on wooden logs.

Process of slab extracting and raising 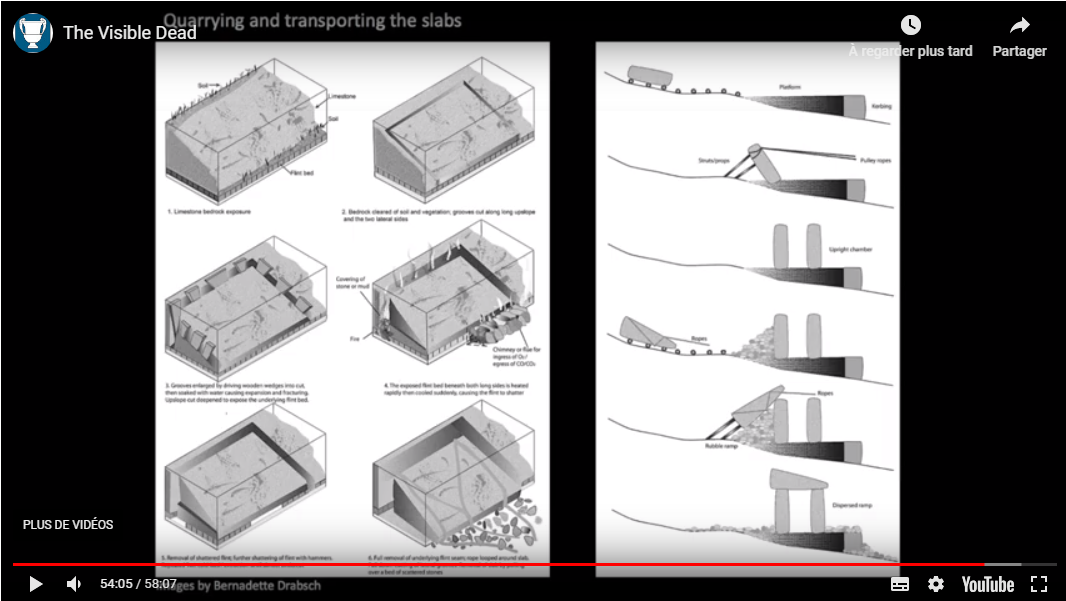 In the surrounding of the dolmens are often found megalithic structures as menhirs and alignments of stones of various size, as well as round holes in the shape of large bowls carved into the rocks that experts name cup holes. The function of the cup holes is unclear. One of the hypothesis is that they coup recover libation liquids or sacrificial blood. However, some of they are too tiny for this function. Another hypothesis suggests that they could be fill up with water for watering birds, maybe for catching them.

Dolmens in Jordan were particularly numerous. We know that from the narratives of the 19th and 20th century travelers, who were very impressed by these enigmatic structures. But nowadays, dolmens are disappearing. A considerable number of them have been removed for the purposes of agriculture or urban expansion. In addition, some were destroyed for no reason, through sheer ignorance, lack of awareness about their historical value, insufficient protection and interest from the authorities. 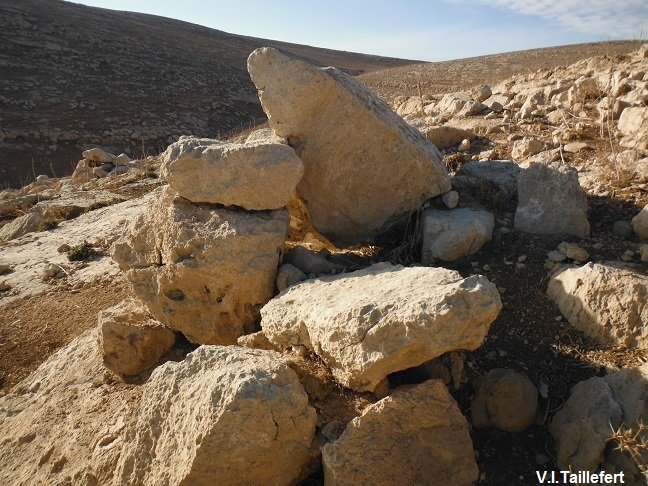 Around Madaba are several dolmen sites, all seriously threatened. Easily accessible, the dolmens of Wadi Al Jideid near Fayha village are monumental. 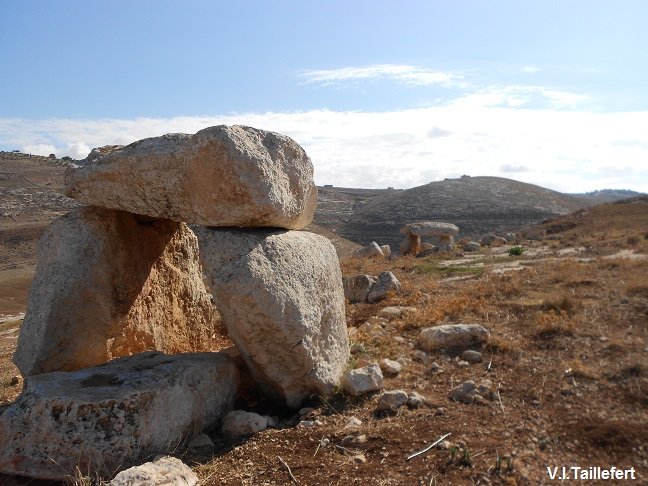 Near Ma’in village, the site of Murayghat offers an exceptional feature: a hill covered with dolmens (about 50) is connected to a flat area presenting diverse stones alignments, menhirs and a large concentration of cup holes. The disposition of the ensemble suggests that there is a special relationship between the platform, where rituals were probably performed, and the dolmens erected on the hill. The meeting between a ritual place, perhaps sacrificial, and dolmens is unique. It raises the site of Murayghat to an exceptional importance that could rival with the site of Stonehenge in England, even though it is much older (estimated to the late Chalcolithic, about 4000 BC). Unfortunately the site is not protected and dramatically threatened by quarries, as well as by the use of the platform for barns. 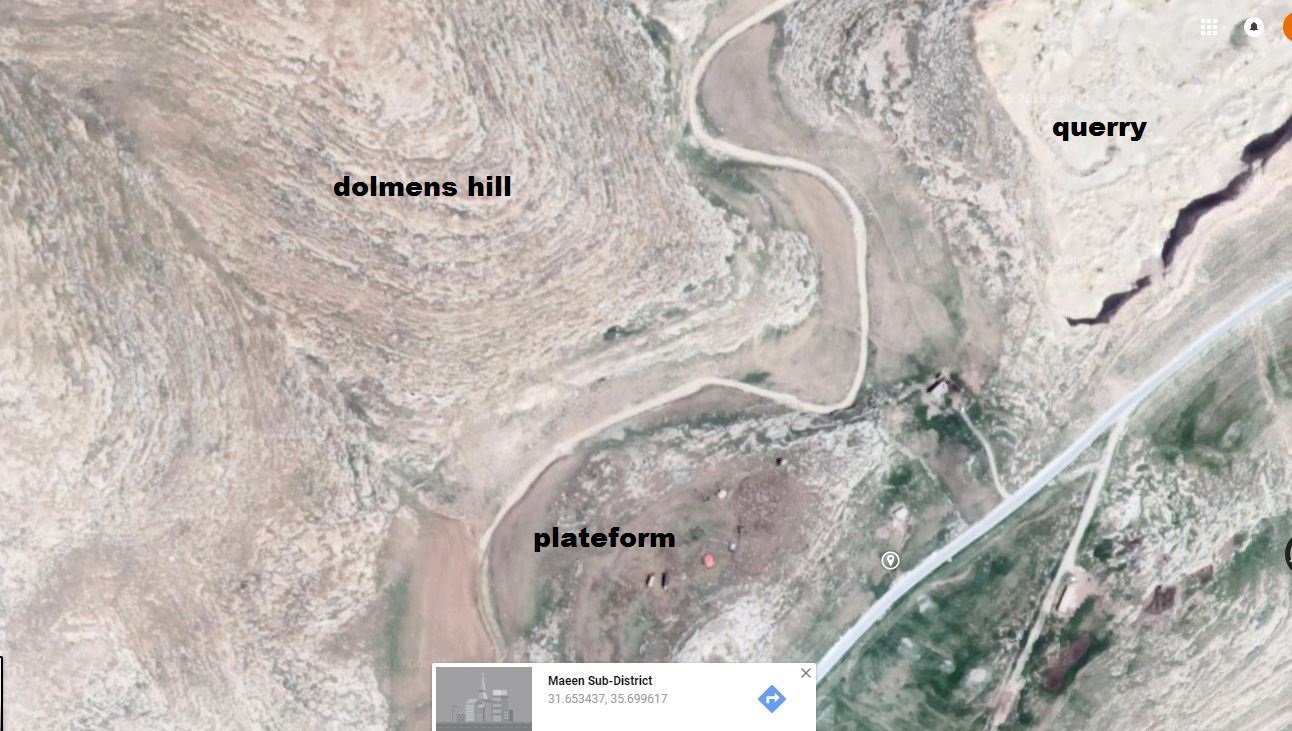 below photos taken in Murayghat in 2013

On the upper part of the hill we found a type of cairn made up of middle sized stones. The place has been subject to wild digging, even if there is no dolmen.The excavation, although wild, shows that the stones were placed in base of the cairn. On the eastern side of the cairn there is an upstanding stone. Of middle size,  it can be distinguished from the others as it has been deliberately carved and kept in an upright position by other stones gathered at its base. No study has been conducted regarding this area.