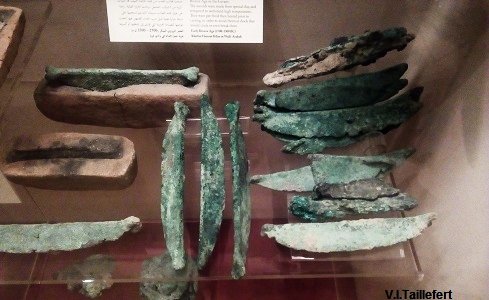 This era is named after the technological innovation of bronze, an alloy of copper and tin. However, in Jordan, pure copper is still used till around 2000 BC, together with flint tools. It is only during the Middle Bronze Age that the alloy of metal starts spreading. Nevertheless, due to social, architectural, technological, political and religious features, this period effectively starts in the middle of the 4th millennium.

It is in the area of modern Iraq that the first cities develop in the early 4th millennium, therefore long before the phenomenon appears in the Near East. Concerning our area, we generally estimate that the Bronze Age starts around 3200 BC but at the light of new discoveries the date of transition between the Chalcolithic and the Bronze Age may be earlier (3500 or even 3600 BC) depending on the region and sites. This period is divided into three main phases (Early Bronze I 3200 - 2250 BC and Early Bronze II 2250 - 1900 BC / Middle Bronze 1900 - 1550 BC / Late Bronze 1550 - 1200 BC), with periods of urban development and periods of return back to nomadic lifestyle. From the agro-pastoral villages of the Chalcolithic period, we pass, in some cases at least, to small fortified towns, which may have served as administrative centres for a whole area. Those "cities" are self-sufficient, with a surrounding countryside related to them. On some sites, we can clearly see central structures identified as temples as well as authority headquarters and storing places, as for example in Tell Zeirakoun, in the north of Jordan. The building structures of this period are massive and impressing. This new urban civilization is associated with Canaanite culture. It raises in parallel with the First Dynasty in Egypt.

The Bronze Age is marked by the organization of the space and the domination of the Man over an environment that he controls better and better. Many terracing works and water canalizations are built at that period. The Man manages to cleverly take advantage of his environment and climate conditions, skilfully passing from the agriculture to the nomadism and vice versa when it is necessary.

The site of Bab El Dhra, in the South of the Dead Sea, provides an exceptional study field, especially due to the several burial modes that have been discovered there. Different types of tombs are matching to different lifestyles: during the periods where the population was mostly nomadic, the defuncts were buried in underground rooms, which could be reached through a pit. The bodies were dis-articulated and the bones carefully classified following their types. During the period where the population has developed sedentary lifestyle, the deceased were buried in charnel-houses, where complete bodies were deposited together (below drawings). The studies of Bab El Dhra have provided a lot of interesting testimonies about the Bronze Age concerning the trade and technological exchanges.

This period is also characterized by great technological advances: The potter’s wheel is fully integrated, we notice the introduction of the chariot, the bronze weapons (therefore also the first armed invasions), and the writing system. All those progresses arrive from Mesopotamia through the Fertile Crescent or, maybe, more directly from the routes crossing the Eastern Desert. The trade exchanges are intensive in the whole area and we can find on the sites a blend of objects coming from Egypt, Mycenae (photo below: Mycenaean pottery) Mesopotamia… 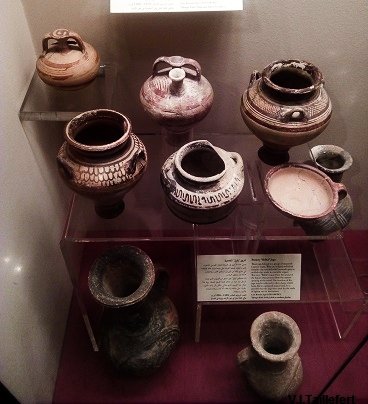