( All the photos of birds published on this page have been taken in Jordan and published on https://www.facebook.com/groups/Jordanbirdwatchers/ )

Jordan is a very attractive destination for birdwatchers, as it is located on one of the most important global migratory flyways between Europe, Asia and Africa: the Rift Valley and Red Sea flyway. The diversity of birds in Jordan is enhanced by this variety of provenance, bringing birds of Afro-tropical, Oriental, European and Palaearctic origins. More than 434 bird species have been recorded in Jordan (2013), so that this country is a particularly interesting destination for professional and enthusiast birdwatchers. 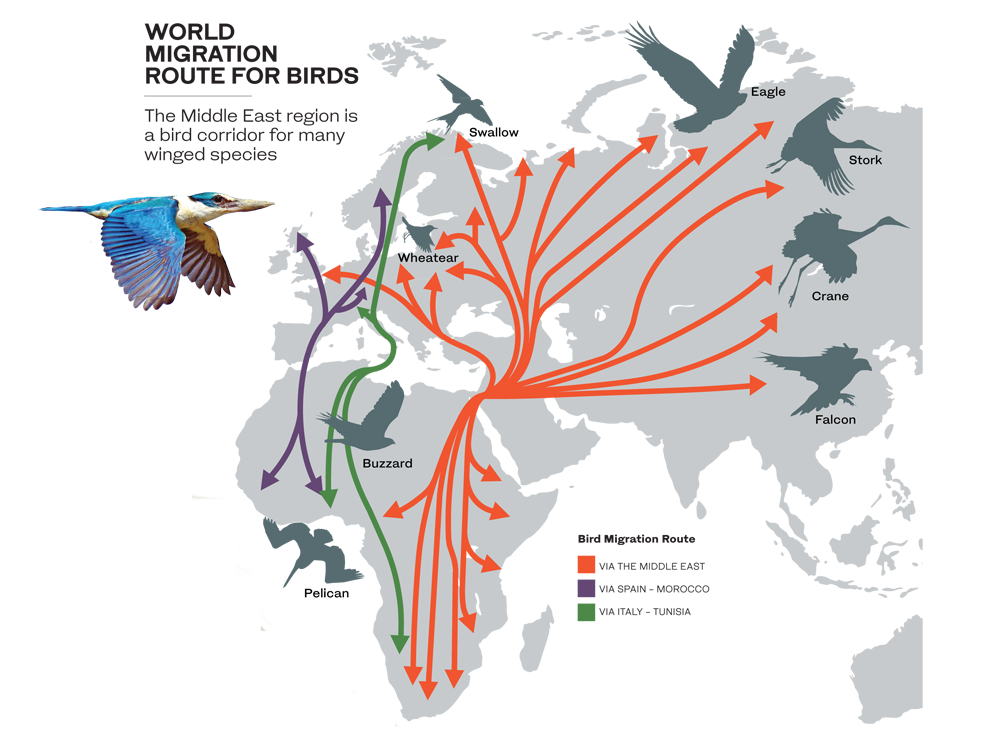 - 434 bird species (the list grows and constantly evolve due to improvement in the records), belonging to 66 families.

- 350 of those species are passage migratory species

The favourable seasons from birdwatching in Jordan are autumn, when birds fly southwards (among them, flocks of Steppe Eagles, Montagu's Harriers, Pallid Harrier...) , winter as some migratory species stay and breed in Jordan, and spring, when birds travel northwards (among them Steppe Buzzard, Honey Buzzard, Steppe Eagle, Levant Sparrowhawk...).The summer seasons counts less visitors. Moreover, the large diversity of landscapes and biotopes in Jordan provides habitats to many indigenous species that can be spotted all over the year.

Birds play a major role in numerous ecological processes. They contribute to pollination, to seed dispersion, to pest control. They are also indicator of the environmental viability. Despite of an interesting biotopes diversity and large desert areas, birds species undergo severe threats and pressures in Jordan, mainly due to human activities. Many habitats zones are located outside of the protected areas and in a relatively small country with a fast growing population, preserved biotopes face more and more limitations.

Birds are impacted by:

- development of intensive agriculture, inducing simplification of landscapes, destruction of natural habitats and food resources, use of pesticides, herbicides and chemical fertilizers.

- decreasing of woodlands (sometimes replaced by cultivated orchards. In this case, traditional farming can contribute to the preservation and diversity of certain species).

The below catalogue gives some species we can see in the different key areas, with a mention about the favourable time for spotting them. It is not exhaustive and can be improved over time. Clicking on the birds names will open the information pages on Wikipedia (below photos by author).

- Ian Andrew: The Birds of the Hashemite Kingdom of Jordan, 1995