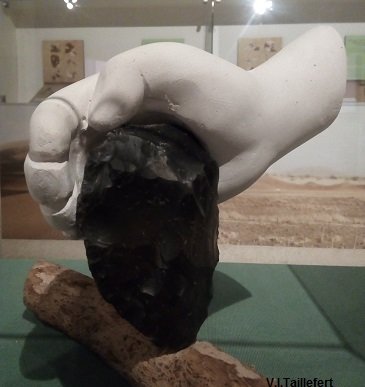 The Jordan Valley is one of the first areas reached by the human groups (Homo Erectus) migrating out off the African Rift around 1 500 000 BC. The oldest traces of a human presence are identified at a very early period, while the first surface tools deposits date back to 450 000 BC. Those deposits are located in the Jordan Valley along the shores of the ancient Lisan Lake that extended from the North of the valley till the southern edge of the present Dea Sea, as well as in the lateral wadies going up to the highlands.

As the Eastern Desert is of volcanic origin, it provides a large amount of flint and chert stone. Moreover, those areas were more. Consequently, numerous human groups settled and wandered in those areas, during the millennia of the Paleolithic and Neolithic ages.

Paleolithic is divided in the following periods:

- Lower Paleolithic: 1 500 000 - 150 000 BC: Homo Erectus produce the first flint tools known as Acheulean, as well as an early Levallois technique. This cut stone technique consists in removing flakes or blades by hitting the stone block on a specific part. (see video)

Middle Paleolithic (150 000 - 43 000 BC): Presence of the Homo Neanderthalis and appearance of modern humans (Homo Sapiens) at the end of this period. The lithic tools develop significantly starting from 90 000 with new techniques as the Levalloisian. The techniques improve around 45 000 BC and we can find knives, projectiles points, drills… this flint industry is called Levantine Mousterian and includes long blades.

Upper Paleolithic (43 000 - 21 000 BC) : Homo Sapiens produces sophisticated stone techniques, including all kind of long and short baldes, as well as a primitive art work.

The archaeologists discovered with surprise, in the vicinity of Castle Kharaneh, a site extending on several acres, dating back to that time and inhabited for long seasons during the years. This site, called Kharaneh IV, dates back to 19 000 - 18 000 BC. The researchers found out the basement of small rounded huts, tombs, an extremely rich and diversified lithic material manufactured with great dexterity, as well as hidings containing beads and shells from the Mediterranean sea or from Red Sea…. Those discoveries show that, at this so ancient time, those areas were much more hospitable than they are today and were offering to human groups a living environment conducive to a technical and economic development. 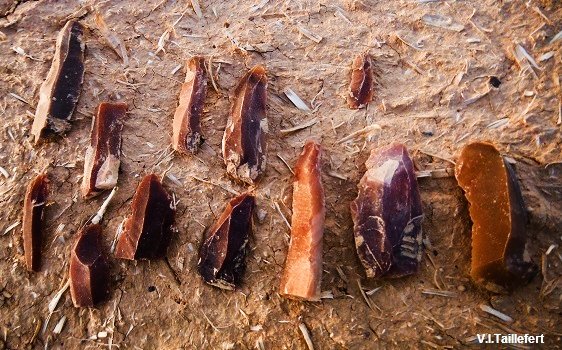