The black stones in Jordan can be basalt or chert. Contrary to what one might think, basalt and chert are from totally different origin: chert is a hard, dark, opaque sedimentary rock which is composed of silica with an amorphous fine-grained texture, while basalt is a common extrusive igneous rock formed by the rapid cooling of magnesium-rich and iron-rich lava. Chert forms when microcrystals of silicon dioxide grow within soft sediments that become limestone or chalk. Basalt forms when lava reaches the Earth's surface near an active volcano.

What we call the Black Eastern Desert in Jordan can be covered with basalt or with chert depending the areas, or both together.

Basalt is a common gray to black volcanic rock. It can even appear dark blue depending on its components. They were at least two phases of extensive volcanic activity in Jordan: during Neogene to Quaternary. It issued directly from magma which cooled rapidly when in contact with air or water. On some blocks appear small holes left by the gas bubbles. 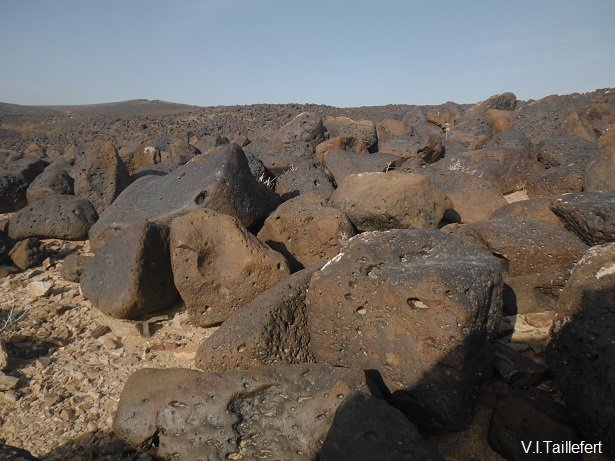 Basaltic rocks in Jordan can be roughly divided into three groups:

- the plateau basalts of the Harrat ash Shaam in the north-eastern Jordan, that we commonly call the Black Desert. It is the larges basalt area covering 12000 km2 , extending from the Jabal Druze volcano area in Syria till Saudi Arabia

- the basalts of the lateral wadies descending to the Dead Sea Rift, which are bound to the tectonics motions of the Rift Valley.

In addition to these areas, basalt are also known in other places in the form of dykes or sills and other minor bodies.

The basalt Eastern Desert which extends eastward is the product of volcanic activity that began 25 million years ago and ended 1 million years ago in the surroundings of Jabal Druze in the south of present-day Syria. Volcanic lava spread around the volcano with an extension to the South till Arabia. 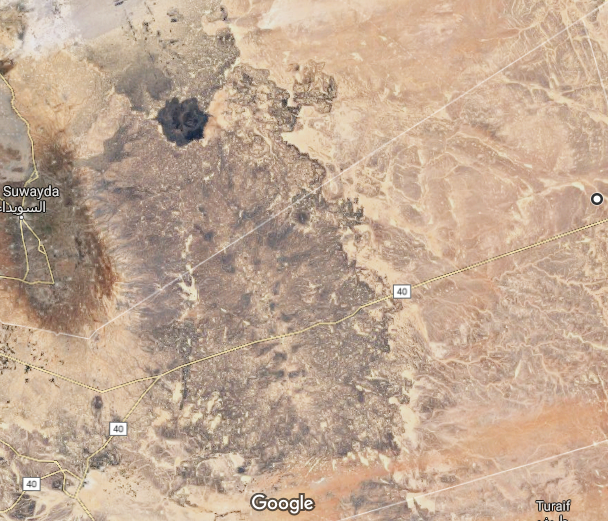 Jabal Druze is a large, relatively flat volcano. It produced a series of volcanic cones which extended southwards till the Saudi Arabian desert. We can see several of these cones from the road linking Mafraq to the Iraqi border,  as well as between Azraq and Safawi.

Inside the mine of a volcanic cone near Jawa

Volcanic plugs could easily be confused with cones. However, their formation is different: they were formed when lava retained inside the orifice of a volcano and retained. When the walls surrounding the volcano orifice erodes, the plug appears up like a basalt mountain. A good example can be seen along the King's Road in the Wadi Hasa.

The basalt layer of the Eastern Desert is superficial and recovers limestone sediments let by successive transgressions of sea waters.

The great temperatures range, typical in a desert breaks the lava blocks into smaller stones.

In many areas and especially in the Hauran, basalt stones are covered with a kind a lichen. This plant mainly develops on the side of the stone the less exposed to sun. The basalt expanse becomes then whitish.

The Eastern Desert also contains volcanic caves. They look like gaping mouths formed when the lava was ejected out of the soil because of ground pressure. Once the pressure relaxed, the lava withdrew to the bowels of the earth, leaving gaping mouths as well as a system of underground tunnels crisscrossing the subsoil of large desert areas. Some example can be seen near the road from Mafraq to the Iraqi border. Some caves are very deep and their exploration may require specialized equipment. These caves of course drew the attention of men during the early periods and we can easily find remains of ceramics nearby. In more recent times, the most accessible caves have been used as sheepfold.

Several animal species adapted the color of their fur or skin to the Black Desert environment, for a better camouflage:

Many areas of the Black Eastern Desert is covered with a plus or less coarse grave stretching as far as we can see. This is chert (or flint). Chert occurs in a wide variety of colors depending on its composition. Continuous color gradients exist between white and black or between cream and brown.  Abundant organic material can produce gray or black chert.  In the Eastern Desert, we find different types with a predominance of black, that produces the most impressive landscapes. However, we have to keep in mind that this black color has nothing to see with the volcanic environment. The flint is a variety of chert. While chert forms in correlation with limestone, flint form in chalk or marl. As the chert, flint can present a large range of colors, even if most of the time black or dark gray, and has the same appearance, so that it is difficult to distinguish them at a simple look.

The concentration of chert and flint stones composing large areas of the Eastern Desert pavement is explained by the wind and water erosion that removes away the softer limestone and chalk deposit and increases by this way the density of heavier chert stones. 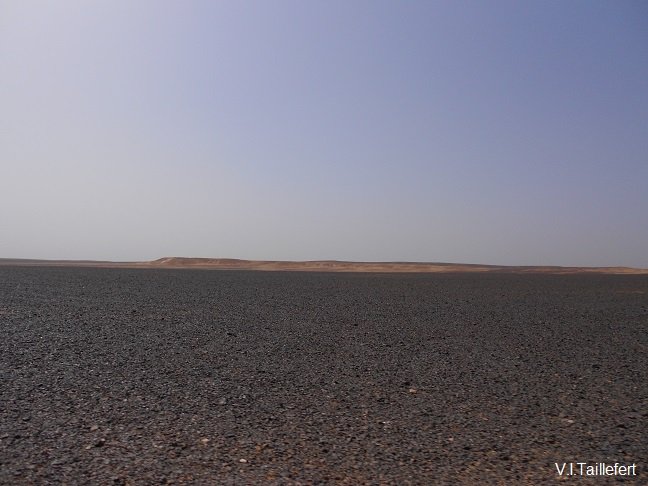 Both chert and flint were used in the manufacture of tools during the Stone Age and even later as it splits into thin, sharp splinters called flakes or blades (depending on the shape) when struck by another hard object of another material. It is thanks to the properties of diffraction of those minerals that humans developed the cut stone techniques, and especially the one called Levallois to make thin blades. 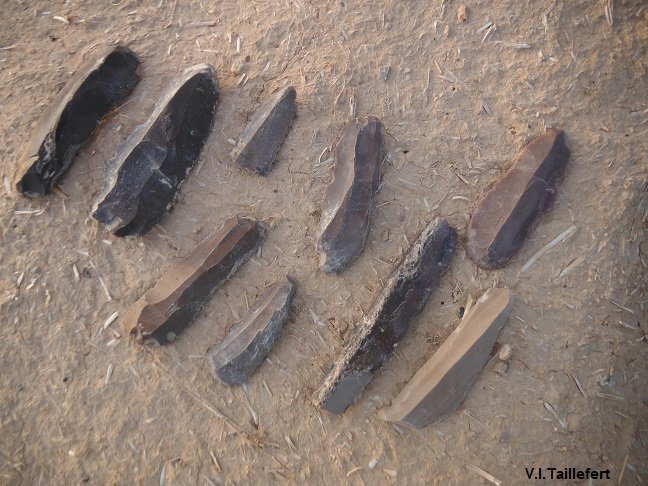 The Azraq basin is a typical example of the many endorheic basins frequently seen in the sub-arid areas in Jordan (Al Jafar) and in Syria. It is more than 13,000 square kilometers wide. It is situated on the eastern spin-off of the Jordanian plateau and on the Southern flank of the Jabal Druze. The bottom of the depression is situated at a 500 meter altitude. Brief but dense winter season rainfalls produce intermittent flows that drain to the bottom of the basin where a seasonal lake appears. This lake dries in the spring and leaves a deposit of salt and gypsum on the bottom.These basins have attracted men and therefore preserve many traces of former human occupation. Salt was extracted till a recent time. Nowadays, an artisan and seasonal salt extraction is still practiced by the local community.

The underground hydrogeology is complex, but freshwater comes mainly from the basaltic water table and erupts in the form of a powerful spring of excellent quality. This source supplied ponds and marshes that formed the ecosystem of the Azraq oasis until recently. Then it was pumped for Amman city water supplying, which exhausted the resource. It is till now pumped for the needs of Azraq farmers.

Basalt is also found in the western part of Jordan, inside the wadies lateral to the Jordan Rift Valley. Its presence is due to the tectonic activity of the fault and the thinness of the earth crust at those places, which also explains the presence of hot springs.