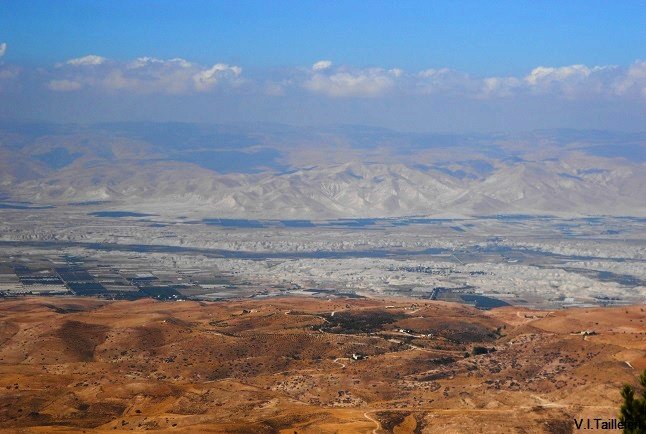 Jordan Valley, the Dead Sea basin and the Wadi Araba represent the northern part of the African Arabian rift system. This fault extends from Tiberias Lake, cross the Red Sea over its full length and ends to Mozambique, with a total length of 7000 km. In our area, the Arabic plate is in contact with the Sinai-Palestinian (also called Levantine) sub-plate. 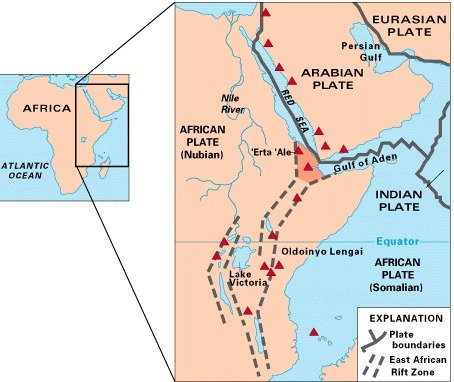 The Rift fault is the deepest fracture of the earth crust. It is formed by the pull-apart tension between the plate. The collapse occurred mainly during the Miocene (23.8 – 5.3 million years ago)  and Pliocene (5.3 - 2.5 millions years ago) eras. 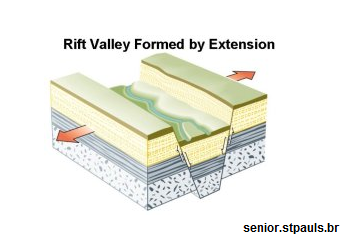 The vertical rifting produced a series of step faults that form the lateral hills staggering along the both sides of the Jordan Rift Valley. The vertical movement of the rifted areas to the bottom of the valley is about 10 km, while the relative uplift of the surroundings margins of the fault (filled rift) is about 1.5 km.

In the same time happen a movement of horizontal offset: the eastern bloc (Jordanian side) move towards north, while the Sinai-Palestinian plate, even submitted to the general northwards motion of the African plate, is submitted to a local southwards motion. This motion procures a strike-slip fault and at the present time, the mismatch between the plates is of 105 - 110 km. Both sides of the valley have the same geological characteristics, however this mismatch appears clearly, for example concerning the copper deposits in Feynan, which match the Timna deposits on the Sinai-Palestine plate but 105 -110 km to the south.

When the strike-slip motion occurs at the boundary between two plates of the earth's crust, we call it a transform fault. If it is associated with a pull-apart tension, as it is the case between the Arabian and Sinai-Palestinian plates, the displacement forms a basin, called transform basin or pull-apart basin. This is the way that the Dead Sea Basin was formed at the Miocene.

The Dead Sea Transform is a still active plate boundary between the Arabian and the Sinai plates probably continuously since Late Oligocene (since about 28 million years). Earth quakes along these structural boundaries occur relatively commonly and in the past, they have destroyed several ancient towns such as the Decapolis cities.

It progressively dried up from 15 000 BC. Sediments of this ancient lake are recognizable as nipples, called kattaras: they are marls of gypsum and salt cut into buttes and plateaus worn down by erosion. Unless headed by some alluvial deposits consisting of red earth, those marls are absolutely sterile. However, some of them form hills that have been occupied by human settlement and are now archaeological sites. It is for example  the case of Tell Deir Alla' and Tell As-Saddiyeh. 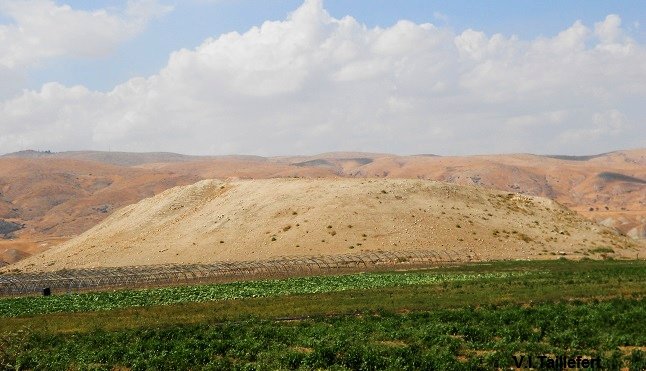 In the southern region of the Dead Sea, the Kattaras preserved a particularly interesting stratigraphy, which provides information on the climate at that time: during the hot periods, evaporation caused the precipitation of white calcium carbonate in the bottom of the lake. During the wet periods, rainfall caused silt gully of the surrounding mountains and its accumulation in the bottom of the lake. These successive phenomena caused an alternation of white and gray layers called Lisan formations. This stratigraphy shows the summers seasons (in white) and winter seasons (in grey / brown). 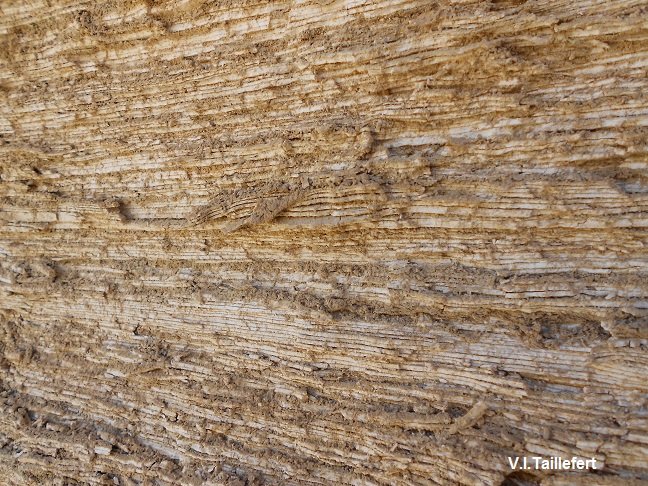 The Dead Sea has varied depths: from 399 m at the northern tip, but it is only 6m at its southern end, towards the peninsula also called Lisan ("the tongue" in Arabic, to denote the piece of earth jutting in the sea in this region and which nowadays links the two shores, due to the lower level of the sea). Salinity is about 6 times the salinity of the ocean. On the surface it reaches 27.5 % of solids and 32.7 % at 110 m deep. Corps can float in the water because of the density of the solids.

The Dead Sea is mainly supplied by the Jordan River and a few of the lateral wadis. There are no evacuation issues due to the fact that Wadi Araba slopes up to Aqaba. The sea level fluctuated over pre-historical and historical periods depending onthe rainfalls. In the past, the Jordan River was discharging 1,200 million m3, excluding the lateral wadis. This amount of water was sufficient to compensate the evaporation and has maintained the sea level around 392m for a long period of time. However, since 50 years and under the pressure of several factors (exploitation of Jordan River water on the western side for irrigation, diminution of the rainfalls, systematic pumping of lateral wadies fresh water sources...) the course of the river has reduced in size and is salt saturated. the Jordan water supply do not compensate anymore the evaporation of the Dead Sea. The level of the Dead Sea continuously decreases at the rate of 50 cm each year. 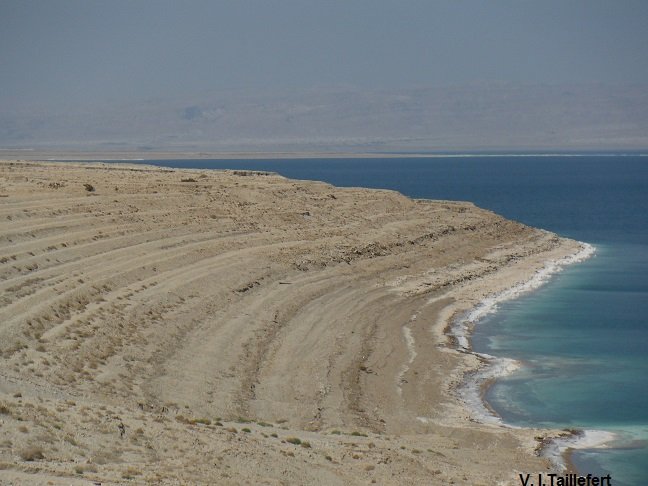 The dewatering of the Dead Sea and the drop of its level cause dolines or sinkholes on the flat shores. This phenomenon is relatively recent and particularly dangerous. The term "doline" is of Slavic origin and usually means a geological depression caused by the dissolution of limestone in the surface layer which forms a circular bowl with diameter between a few meters to several hundred of meters. Around the Dead Sea however, the phenomenon is slightly different: the water withdrawal has left huge sandy zones subjected to the fresh water flow, on the surface or below the ground, which dissolves the salt. The ground becomes very crumbly and pockets form under a thin layer of soil. This layer may collapse from its own weight or if one walks on it. These collapses can be up to 25 meters in depth. They are indeed a real danger for people as well as for constructions. A particularity of these sinkholes is that they can fill up with water and empty suddenly like a “sink”. There is no way to stop this phenomenon. 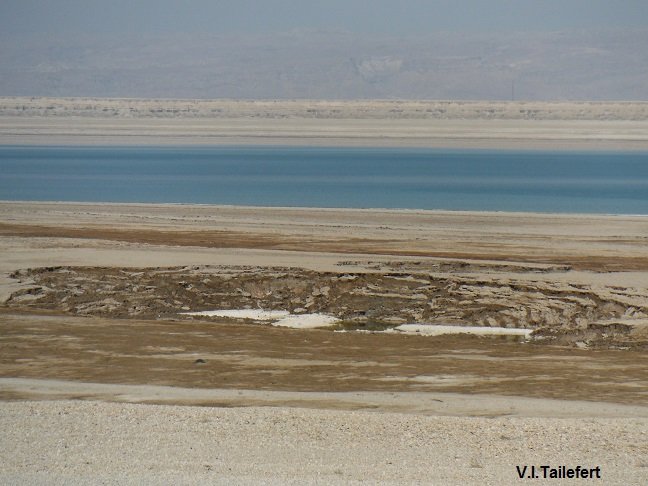 From ancient times the Dead Sea was famous for the bitumen, although according to Pliny the Elder ( Natural History, T.2 , L.35) it was not the only place to produce this substance. The Romans also called the Dead Sea “Lacus Asphaltitis”. In prehistoric times, the adhesive property of bitumen was used to fix arrowheads to wooden shafts. The Sumerians used it as cement. The inhabitants of Ain Ghazal used it for decorating their statues and the Egyptians for preserving mummies as well as for manufacturing cosmetics or drugs, Phoenicians and Babylonians used it to quench the boats hulls. This last use was widespread throughout the whole Mediterranean basin. Bitumen, which was collected on the surface of the water, seems to be related to seismic and volcanic activity of the sea beds that leak masses of oil residues. It could be found either floating on the surface of the water or as a deposit on the shores having the shape of more or less large blocks. Nowadays, bitumen leaks are rare. 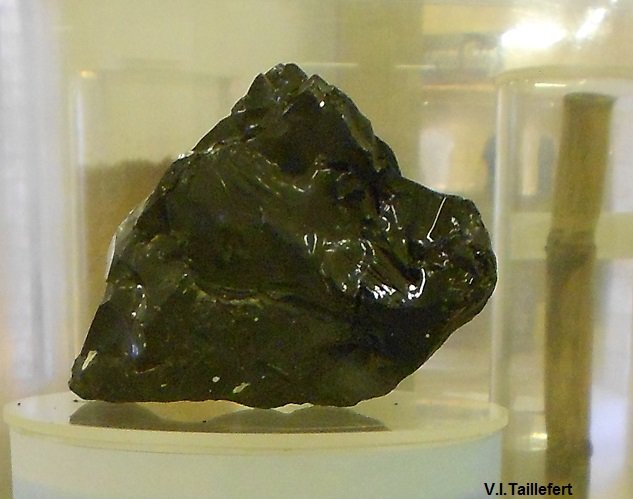 Geologists think that Sodom and Gomorrah cities have been destroyed by fires induced by the leaks of oil and asphalt gazes (carbon disulfide and hydrogen sulfide) that ignited under the effect of seismic shocks that happened around 2100 BC.  Earthquakes have also sometimes caused tsunami waves, the impact of which can be seen around the Dead Sea.

At the proximity of a tectonic fault, the earth crust is thinner. Lava flows are visible in many lateral wadies. Moreover, as the magma comes closer to the superficial levels, hot spring emerge in several lateral wadies, as for example in the Yarmouk Valley in Al Himma, in Hamamat Ma'in and at Hamamat Afra in a secondary wadi of the Wadi Hasa. Gases such as hydrogen sulfide and radon are also released. As the minerals dissolve easily in water at a high temperature, those sources are rich in minerals and may even contain radioactive elements. Ma'in water is rich is sulfur, while Afra water contain radioactivity. The rocks inside the lateral wadies may also contain crystals in some places. The crystal is composed of minerals that have melted in contact with a heat source and which then cooled progressively. The most common crystal in Jordan is the quartz which can be found in particular in the Wadi Mujib and in Feynan.

When the Lisan lake shrank, the remaining water dag a bed into the marls, forming the deep trench beneath the kattaras, where the Jordan River flows nowadays, between Tiberias Lake and Dead Sea. This secondary depression is called the Zor. Flowing in soft sediments, the river course has changed over time. We can particularly notice it at the Baptism site. The Zor was covered till recently with dense vegetation of thickets, reeds, tamarisks, acacia and other thorny bushes that allowed animals - lions for example till the Middle Age - to hide or villains to find refuge. Until the middle of the 20th century, this area was infested with malaria.

The Red Sea is the marine extension of the rift between the Sinai-Palestinian sub-plate and the Arabian pate. Its maximum depth is 1,000 m but the Aqaba Gulf reaches already 700 m deep. The clarity of its waters allows the light penetration till 70 m. depth, which is particularly favorable for the development of corals. 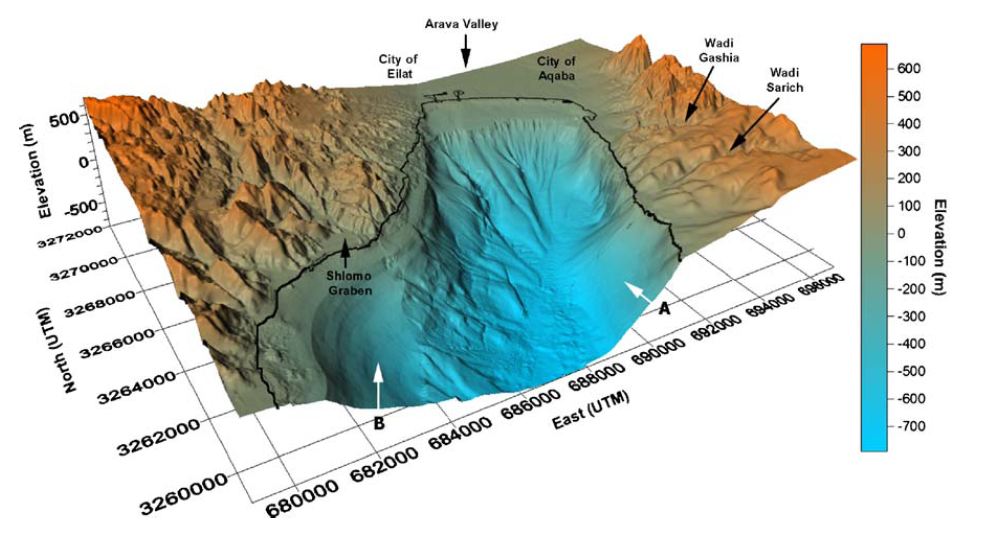 Along the shores, fossil reefs terraces, dating back to the Pleistocene, contain corals and echinoids till an altitude of 75 m above sea level. Their presence is not due to a fluctuation of the sea level but to folding movements. Such movements have affected the Gulf of Aqaba and the Jordan Rift Valley since Oligocene times 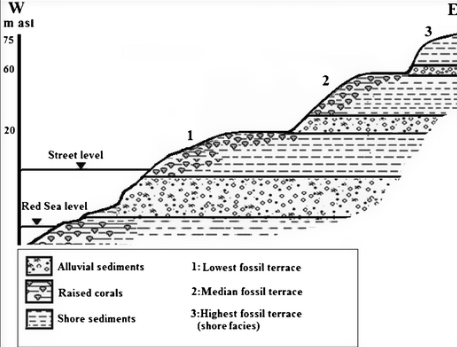 Above images from K. Bandel, E. Salameh, I. Alhejoj art., ref. below