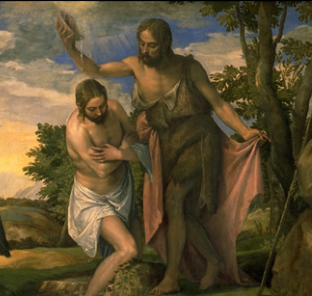 John the Baptist, Jesus' cousin, is the prophet who opened the door for the Christ's ministry. He spent several years as a hermit in the desert, before starting to preach and to baptize people in the Jordan River. The site where he lived was a pilgrimage center from the 1st century AC, if we consider the remains found on Tel Kharrar. It is very likely that at the time of John the Baptist, this ...

place was visited in memory of Elijah; the remains of Roman pottery also suggest the existence of a small village. In other words, John would have chosen to settle down at an already sacred place. Bethany will keep being a pilgrims resort for the following centuries, until the early days of Islam. For the pilgrims, this center represents a step between Jerusalem and Mount Nebo. 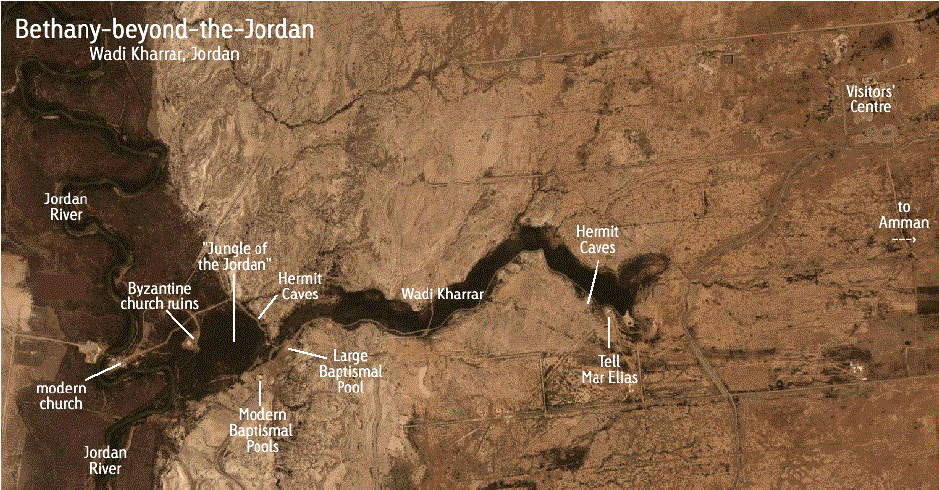 Tell Kharrar, also called Elijah Hill,  is located on top of a small wadi watered by a spring, at about 2 kilometers from the Jordan River. The first structures of baptismal fonts and churches found in that area date back to the 1st century. During the following centuries, other baptismal and religious structures were built, as well as a hydraulic system and a hostel for receiving pilgrims.

Meanwhile, John the Baptist is supposed to have lived in one of the  caves along the Wadi Kharrar (photos below), which was later converted into a small chapel and through which now flows a water source. Throughout wadi Kharrar, no less than nine buildings were discovered.

The baptism place is located much lower, at the junction of Wadi Kharrar and a former branch of the Jordan River. The foundations and the pavement of a large church of the 4th century have been found there, that is called now the St John The Baptist basilica. From this structure, a flight of marble steps led down to a cruciform baptismal pool where four large piers were supporting a chapel, probably the "Chapel of the Mantle" commemorating the spot where Jesus took off his garments before being baptized. Nothing remains from this chapel today, however, at the 12th century was build a small structure on the NW pier, the basement of which is visible today. This chapel probably commemorate the exact place where Jesus was baptized.

John the Baptist was a prominent figure. He drew in crowds and gathered many disciples. He did not hesitate to denounce either degrading morals of powerful people or even political deviousness. In particular, he condemned the adultery of Herod Antipas, Tetrarch of Galilee and Perea, with his sister in law Herodias. Herod Antipas imprisoned him in a cave, in the vicinity of his residential palace at the top of Machaerus mountain over the Dead Sea. We do not know if the story of Salome’s dance is historical or not, since only the Evangelist Mark mentions it. Anyway, Herodias managed to exclude the prophet, so that John the Baptist, 28 years old, has been beheaded in Machaerus. If his moralizing speech bothered Herodias, the character of John the Baptist also worried the Tetrarch because of his ability to gather crowds and influence people. In Machaerus, the pilgrim will visit the ruins of Herod Antipas' palace. If he has enough time, he may be able to visit the cave where John the Baptist was supposedly imprisoned, which is located on one of the hill slopes. In Madaba, he can make an interesting stop at the St John church.