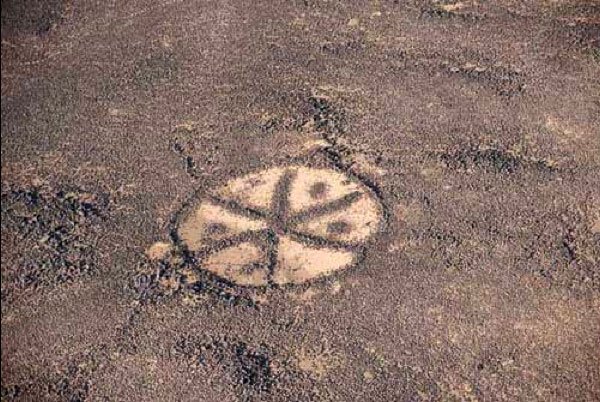 The airline pilots are first to have noticed and reported about strange shapes that they observed while flying between Amman and Baghdad. That was the starting point of the extensive and fascinating study field of a large variety of prehistoric stones structures scattered through the Levant deserts. 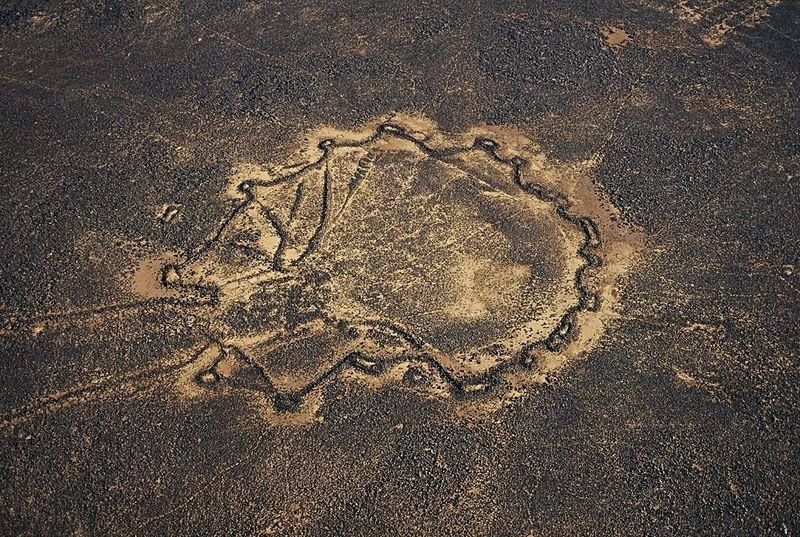 Kites are generally known to be traps positioned on the migration routes of ungulates and especially of gazelles. They consist in long walls (about 50 - 70 cm high) converging to an enclosure, the corners of which are equipped with caches allowing hidden hunters to shoot the trapped animals. Kites can extend over many kilometres.  In Azraq area, kites are clearly oriented in a way to trap the herds moving towards the oasis. We can find also many examples that seem to be designed for intercepting the animals when they come for drinking, along a wadi or and on the bank of a body of water. Some kites take clearly advantage of the topography, as show the illustrations below:

Building those structures supposes the sense of space organization and a collaboration among the community or even between communities. It also attests of a trend to a relative sedentariness or seasonal settling. Up to about 7000 BC, the people of the Eastern Desert had a hunters and gatherers lifestyle and used to follow the wild herds. With kites, the predation technique changes, humans somehow stay in the same area for tracking herds.  We find a high concentration of kites in the Eastern Desert of Jordan. However, this trap system has been used over a very extended geographic area, from the Near East to the Central Asia and from the Caucasus to the Arabic Peninsula. Jordanian desert kites study must therefore be integrated in a comprehensive understanding of a large scale phenomenon. We can even distinguish local typologies. 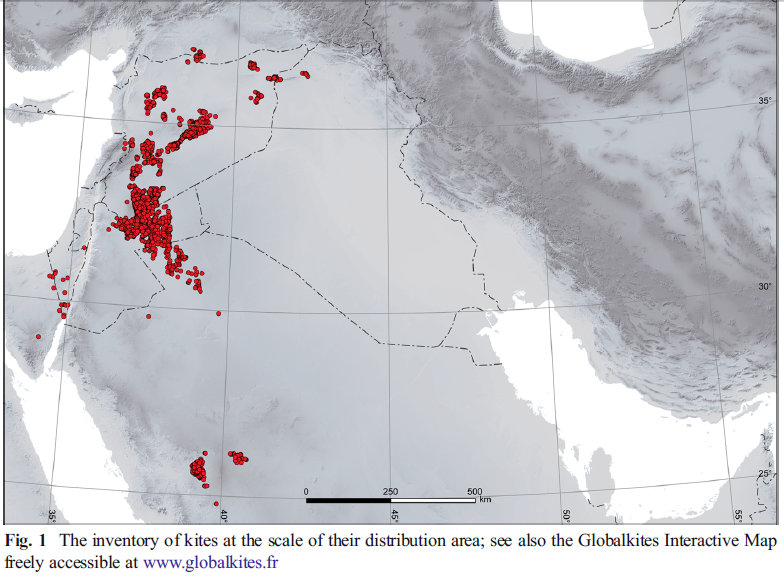 Those structures are difficult to spot from the ground. However, an attentive eye can notice unnatural arrangements of stones, lines and circle. Here the example of a kite located North to Jawa: 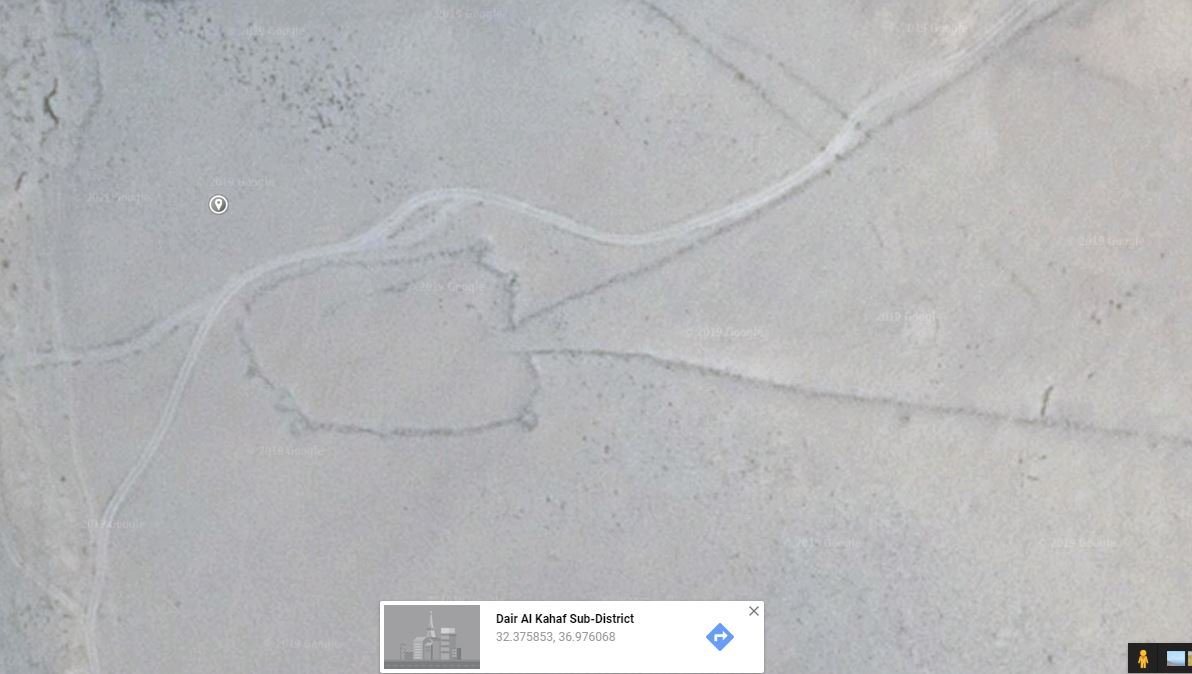 On the ground, you will see...

Dating kites is uneasy. The on ground archaeological remains are poor and we have almost no stratigraphy. Nevertheless, we know that the use of kites probably extended over thousands of years starting from the 7th millennium BC. A similar technique is attested till an historically recent time in the reports of the 19th and 20th centuries travellers who observed the hunting methods of the Bedouins in Syria and Jordan, and also in the North African desert. By the way, the Bedouins of today are still aware about the use of those structures.

In view of the density, the complexity and probably the efficiency of the kites in the Eastern Desert, some scholars do not hesitate to speak of gazelles' mass killing and even suggest that this system would have contributed to the decline of this species in the Middle East. That gazelle meat held a dominant place in the diet of the Eastern Desert Neolithic dwellers is confirmed by the born remains found in the huts settlements. Nonetheless, inside and around the kites' enclosures, there are no trace of mass slaughtering or butchery that we can attribute to the Neolithic. Moreover, an over exploitation of the available resource should be reflected somewhere in their lifestyle of that period, for example in trading, but till now we did not find any attestation of such facts. Nevertheless, recent surveys conducted on the large scale of the Levant bring evidence that at later periods (after 4000 BC) mass killing was practiced in connection with the emergence of urban societies. The over centuries use of kites till recent periods seems effectively to have had an dramatic effect on the ungulates species that are now extinct (or almost extinct concerning the gazelles)  in the Levant.

The extremely complex walls structures that we see in the Jordanian desert are probably not all contemporary. What we see today on the satellite imagery may be an accumulation of systems dating to different periods. In addition, another hypothesis suggests that the enclosures did not serve only as hunting trap. Some of them may probably be used for keeping animals. On the below examples, we see a kite including sections looking like animal pens.

The kites have maybe played a role in the transition from hunting to taming and then to animal husbandry. The following example show a kite in the area of Jabal Qurma. Archaeologists could determinate that the enclosure on the side of the trap do not belong to the original structure but are later additions. 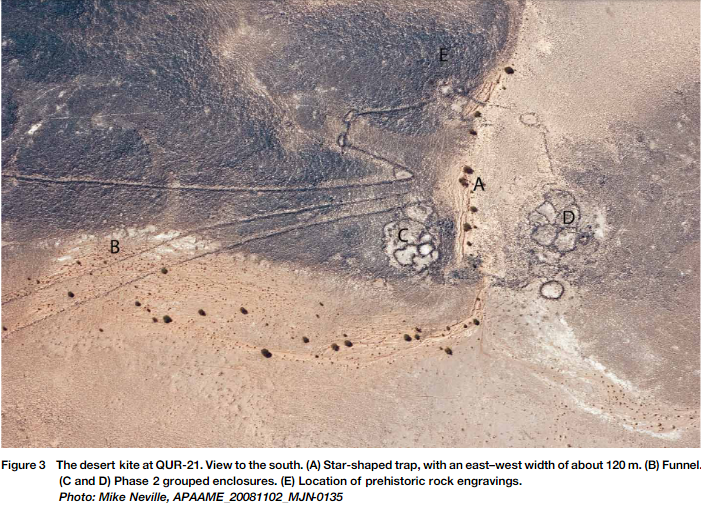 Some petroglyphs attest the use of the kites, while those structures are effectively often located near petroglyphs.  It is however difficult to interpret those scenes and determinate if we are in front of hunting representation or animal husbandry activities.

The especially high kites density in the Jordan Eastern Desert is probably in correlation with the sudden increase of the population attested by the numerous settlements during the 7th millennium BC. Studies are ongoing, but the first results already show that the population attested in the Eastern Desert at that period is not homogeneous. A part of it brings cattle of sheep and goats, probably attracted by the greenish landscape of the basalt areas at that period, while another part keeps a hunting lifestyle. However, in both cases, although managing livestock, people still largely depend on hunted products for their nutrition. The impressive increase of the settlements has probably induced a large use of the kites for trapping gazelles.

While the kites start benefiting of a better understanding, other shapes that we can observe on satellite imagery are still keeping their secrets. Those structures are barely noticeable from the ground, but clearly recognizable from the sky.

Archaeologists call them wheels as a part of them are effectively organized in the wheel layout. However, we make enter in this category other plus or less circular structures including lines radiating from a central point or enclosures clusters organized in circle. In all cases, those structures reveal a planned and intentional space organization (all following pictures taken from Google Earth):

The geographical extension of those phenomena seems limited to the basalt areas of the Eastern Desert (the Harret Es-Sham) and essentially in Jordan, except some specimen in Saudi Arabia. Therefore, the wheels could be a local phenomenon.

- walls are very low (about 20 cm) and basic, without stone squaring

- they are often (but not always) located on the top of a basalt hillock or on a slope facing a mudflat area with extensive view over the surroundings, in an open and visible location.

- they are often grouped and even seem to be in relation with each other, even if we can also find some isolated cases. 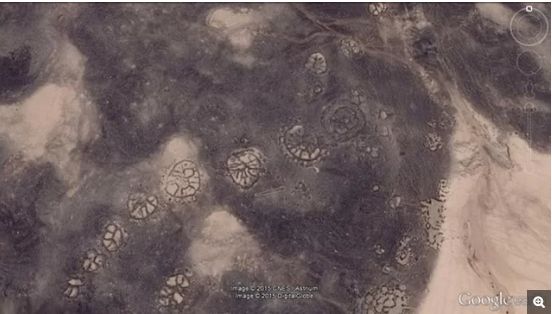 The centre of the wheels is often a natural basalt outcrop from which extend radiating walls or is integrated in a way in the layout. The centre can also be an enclosure. In this case, the wheel has a shape of a flower or a horseshoe. In some wheels, the walls seem to be built in a shape of hairpin. We find some specimens without radiating walls (bull eye). (All following pictures taken from Google Earth)

And finally some shapes seem to defy any classification. Other are maybe just rounded enclosures clusters or have been damaged by a posterior reuse of their stones.

Many wheels are surrounded by a ring of cairns or hut-like basements. Some includes cairns inside their structures. The presence of cairns (tombs) has leaded to the hypothesis that wheels are funerary monuments. However, while some cairns are effectively prehistoric, many of them date to the 2nd to 4th century AD and would have in this case no direct relation with the wheels that are estimated to belong to the Late Neolithic or Chalcolithic periods (about 6000 – 4000 BC), following the analyse of the lithic material and pottery. Moreover, we can notice the presence of cairns circles around enclosures clusters that are obviously not wheels. We must probably take in consideration a phenomenon of reuse of stones along the time, what means also modifications in the use of the sites and the structures by the later occupants, as apparently some cairns builders could have reused the stones from the wheels. Similarly, some wheels integrated in kites structures are apparently posterior to the original structures and maybe built with the stones found in place.

Therefore, the function of the wheels is still enigmatic. While at the regard of some features we would be tented to see religious purpose for some of those structures, we can not also exclude a purely practical functionality, as for the livestock management for example.

Other totally mysterious traces and remains, as for example the circular paths, seem anterior to the kites as kites structures sometime overlap them. Indeed, they maybe date back to the Epipaleolithic. Those paths let us without any explanation. They are of 1m to 1.5 m wide and design an enclosed itinerary. They are sometimes located on the top of a hill, but not always.... they appear close to settlements. On one of the below pictures, the path seems effectively in relation with the settlement as traces show that the dwellers walked regularly between the paths and their houses. We find hundreds of specimens of those enigmatic paths in the basalt areas.