With the conquest of Alexander the Great in 332 BC, we get into the "classical period". The Western part of the Levant will henceforth undergo the influence of the Western cultures.

From the classic Antiquity date back the most impressive remains that the travellers usually visit. Our area, while always neighbouring the zones of diverse cultural influences, experiences a superposition between the Western culture which seeks to extend to the East, and the expansion of the Nabataean kingdom, resulting from the partial settlement of a people of Semitic culture.

Chronologically, we use to make the distinction between the Hellenistic period (332 to 63 BC, date of the Roman conquest over Jerusalem) and the Roman period (from 63 BC to 324 AD, date of the emergency of the Byzantine rule). Inside those periods embeds the Nabataean kingdom (from 312 BC to 106 AD). However, the life of the Transjordanian inhabitants do no longer fundamentally change during the ages. The Jordan Valley is used as a transit way and Transjordan becomes a hinterland populated by farmers and shepherds, before the deserting expanses to the East. Our area is located in the periphery of the Western and Eastern geopolitical poles, a little in-between.

The Hellenistic settlements are poorly documented archaeologically and remain relatively modest.  However, the studies are probably deceived by the phenomenon of the reuse of building material during the subsequent periods. Um Qais is generally reported to be a Hellenistic foundation which would originate some known characters in the Greek world. However these people have never lived in their native town. At that time, Amman became Philadelphia and we can notice some earthwork on the citadel, without to be able to reconstitute an global overview. The only building of the Hellenistic period that we can visit is the never achieved residence in Iraq Al Amir. This impressive construction is linked to the personal story of a man of the Jewish high society, who thought to run quiet days in the countryside at the end of the Wadi Seer valley, but could not achieve his project.

In the South of Jordan a people start emerging as a social, cultural and political entity: the Nabataeans. It is commonly believed that they were basically nomads originate from the Eastern part of Arabia, although this hypothesis remains debatable. Following this theory, their choice for settle would have been motivated by the need of keeping an identity in order to survive in a world where all the great powers were developing urban civilization and social organizations. Another interesting hypothesis suspects the origin of the Nabataeans in the Southern Jordan, from where they would have extended their influence to East, West and North.  In all cases, the Nabataeans skilfully played with a partial assimilation to the modes of their time in order to maintain a position in the international arena, while they were also preserving their specificities. The Nabateans temporarily extended their power over the region in a kingdom with fluctuating borders. 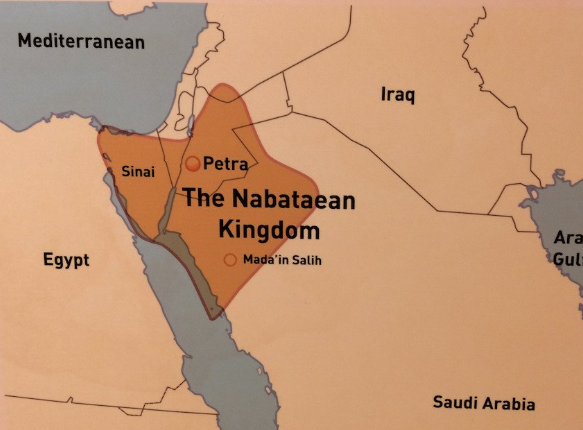 At that time of the Roman conquest (1st century BC), Transjordan and its quiet countryside were considered as a portion of the eastern boundary line of the Empire. In order to take a maximum advantage of the commercial traffic in the region, the Romans modernized and developed a full network of roads over a very ancient axis extending from the South to the North. In the North of Jordan, South Syria  and North of Palestine flourished westernized urban centers called the "Decapolis cities". The elites of these cities were maintaining cultural and probably commercial links, which suggested to the historians the existence of a sort of leagues (the Leagues of the Decapolis). However, it is improbable that this cities union played any political role. Typically Roman monumental constructions emerged at that time and make nowadays those sites spectacular to the visitors. The ruins of Jerash are the most well-known and the best preserved, but Amman, Pella, Abila, Beit Ras, Um Qais were all  flourishing at that period and the arts reached a fairly high level of development. 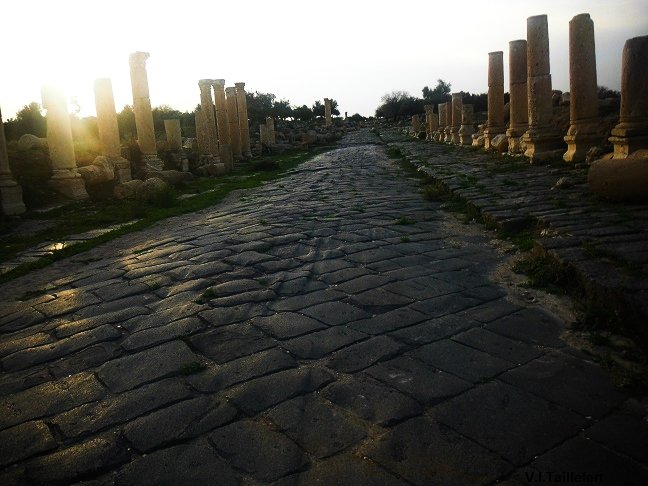