Petra is the ancient capital of the Nabatean kingdom. The origin of the Nabateans is uncertain. It was thought that they were native from the shores of the Persian Gulf, but they also could originate from South Jordan itself. They were specialized in the trade of oriental products and especially frankincense, traveling from a culture to another between Arabia and the Mediterranean Sea. They partially settled in the region of Petra starting from the 2nd century BC, essentially for political reasons: in a world dominated by Western social and political models, creating an entity similar to a kingdom with a main city allowed them to maintain their existence. Nevertheless the Nabateans partly remained nomads.

For their main settlement, the Nabateans chose a location the access of which was protected by a narrow rocky fault with 1.8 km of length,  the Siq. Experts in water systems, the Nabateans brought water till the middle of the city with a channel dug in the rock all along the Siq.

In order to meet the current standards applied in the powerful cities of that time, Nabateans broadly borrowed an urbanism from a culture that was basically foreign to them, the Hellenistic-Roman culture. They amalgamated it with some features of the Egyptian and Mesopotamian cultures or even further. The outcome is an interesting diversity that became their identity, at least to our modern eyes. 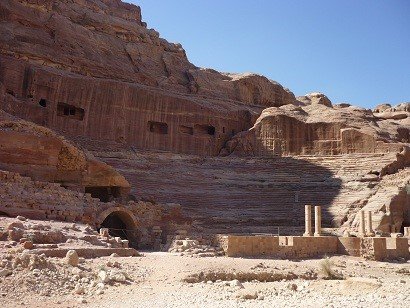 Petra is especially admired for its front tombs carved out of the rocks. The use of caves to bury the dead was a common practice in the whole Near and Middle East till Iran and the Arabian Peninsula, where several sites included carved facade tombs. However, the Nabateans enriched the facades with typical western features. The interior of the tomb consists of a huge hall with in certain cases funeral alcoves situated at the bottom or sides. These rooms were probably used for banquets in honor of the deceased. In some monuments, the burial chamber was located below the banquet hall.

The most beautiful specimen is the Treasury. The decoration of its facade is considerably inspired by the Hellenistico -Roman aesthetic, fashionable at that time. On the other extremity of the site, the Monastery tomb, so named as it sheltered monks at the Byzantine period, has a starker decoration but is as well majestic.

The Nabateans carried the art of facade decoration to its peak. Even damaged by erosion, the Royal Tombs show till which level they brought their mastery of techniques 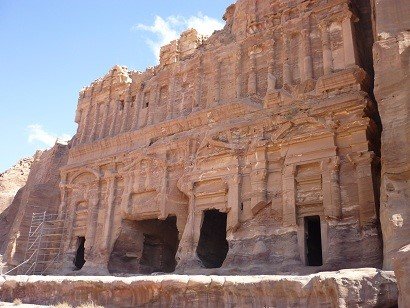 Nabataean tombs are present in the whole region of Petra. At Beidha however, the monuments that could at first sight be identified as tombs are in fact taverns. Beidha is situated about 10 km North of Petra. It is the place where the caravans used to stop and merchants to gather for eating and resting in a small Siq protected by an arrow entrance. 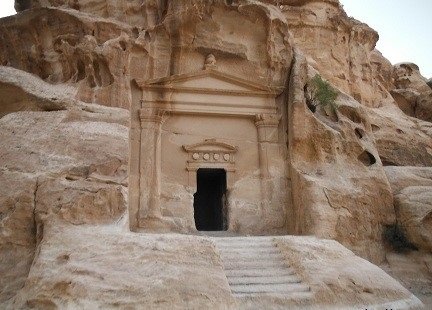 Beidha preserves the only Nabataean mural painting, which delicacy and beauty prove that the Nabateans were great artists...

The Nabateans developed a very typical ceramic during their period of semi-sedentary lifestyle. This ceramic generally exhibits plant pattern or animals and is more delicate than any other. On sites through Jordan, the shards of the Nabataean pottery are easily recognizable as they are particularly thin. (we remind that it is prohibited and inconvenient to collect pottery shard on archaeological sites)

The other great originality of Petra lies in the color and design of the rocks.This phenomenon is due to successive deposits of iron and manganese drained by the infiltration of water in the rock. They are called Liesegang strips or rings.