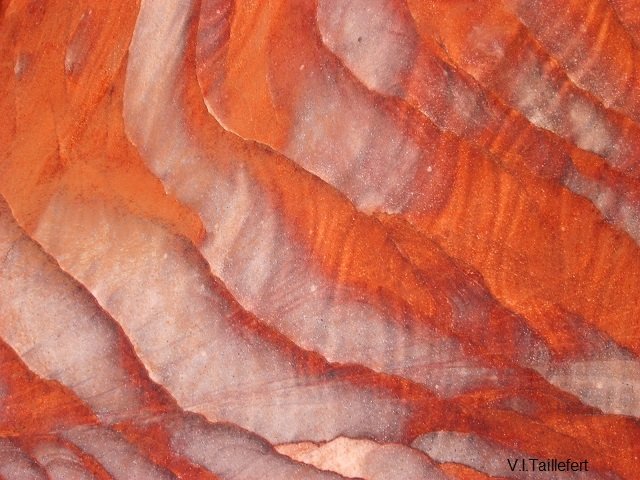 Sandstone is present in the surrounding regions of the Rift Valley - Dana, Petra as well as the Wadi Rum desert. It was formed between 590 and 408 millions years ago. Distinct types of sandstone can be found in Jordan and each of them has produced unique geological landscapes: the red and hard sandstone forming cliffs (Um Ishrin sandstone) ,the white and soft sandstone forming the domes visible in Dana and on the top of Wadi Rum mesas (Disi sandstone) and  rose shaded soft sandstone. 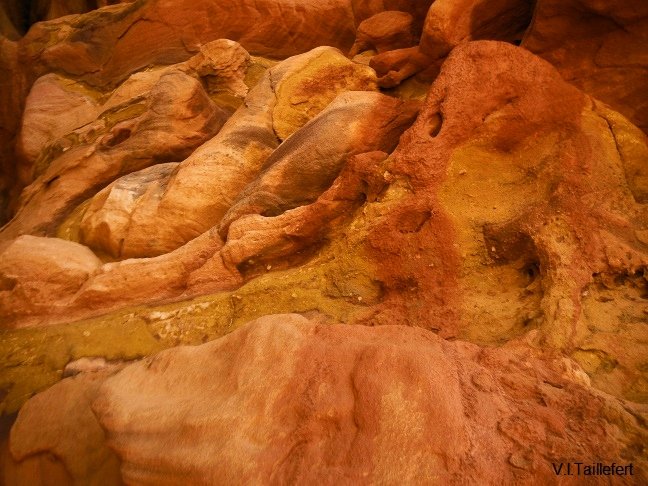 The Wadi Dana, with a vertical drop of 1700m, was formed on a layer of softer stones that were eroded by a stream, which was probably much more impetuous than is the case nowadays. White nipples seen in the surroundings are deposits that had been eroded by water 500 to 400 million years ago. The belong to the same layer that the white sandstone summits in Wadi Rum. They are not as recent as it could appear at the first look and contain many fossils. 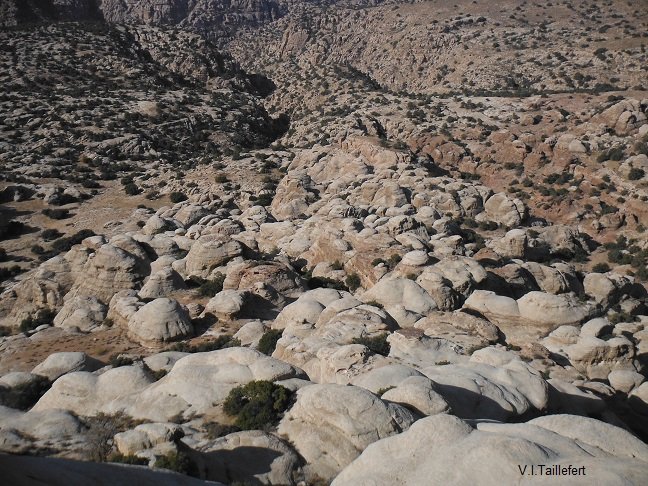 In Wadi Rum, the mesas were formed on the intersections of faults that divided the sandstone into blocks of more or less cubic or rectangular shapes. The tectonic activity pushed the sandstone up to the surface which was then cracked. Due to the erosion process, the faults first became gorges, which then expanded under the force of sand, wind, and water, and finally formed wider valleys. The top of the mesas are situated at 800 m above the level of the plains. When a mesa is almost laminated by erosion we call it a mound. The base of the mesas is made of granite and basalt, while the top of it is made of mostly white sandstone.

Um Ishtrin mountain, with white sandstone on the top and red sandstone in the lower part, laying on a granite-basalt bedrock 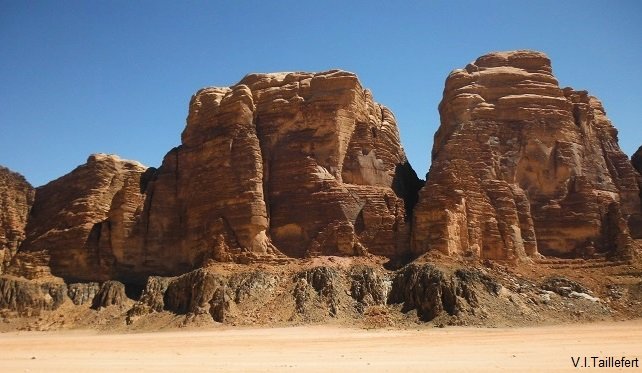 The Siq of Petra was formed when the force of water followed a weaker line in the rock. The softness of the rose sandstone motivated the Nabateans to settle there and easily adapt their environment to their needs. The sandstone erosion of Petra is such that it represent a major preservation issue on the site. Beside the natural factor such as wind, sand and water, the daily venue of thousands of visitors increase the challenge.

The very specific colors of the rocks of Petra, varying between yellow, orange, red, gray, brown, blue and purple, were formed by successive deposits of iron and manganese drained by water infiltration into the subsoil rocks at a great depth. These phenomena are called Liesegang strips or Liesegang rings. Their geometry always produces undulating and more or less parallel strips of different colors, sometimes organized in nested rings. Their origin is the rhythmic precipitation of oxide and hydroxides of iron and manganese ( from water chemically saturated in these same metals which circulate by percolation within the rock itself, or in the substratum (here a pan-African base). In the first instance, the water, which circulates inside the rock, dissolves and drives those metals. In the second instance, due to the migration of this water by capillarity through the pores of the rock, the metals will separate and deposit individually as insoluble compounds at different distances. Water has circulated in these sandstones repeatedly since their deposit about 500 million years ago, and each new water inflow results in the superimposition of these figures.

Petra is not the only place where we can admire those phenomena. Many examples can be found in the lateral wadies descending to the Rift Valley...