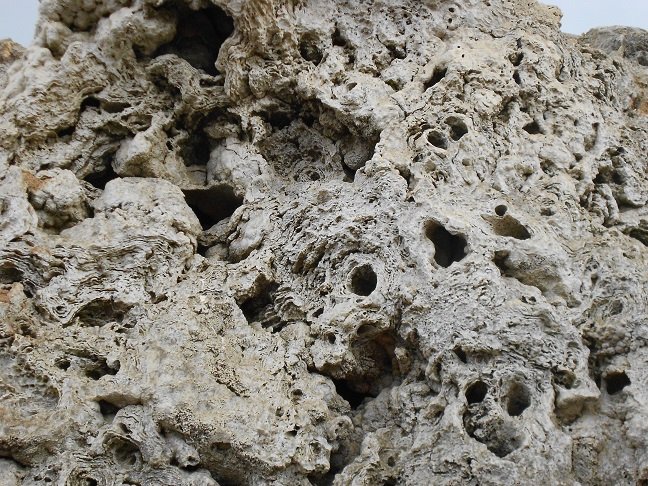 This page exposes some of the geological phenomena that you can observe while roaming through Jordan... new elements will be added over time.

Fossils are very common in Jordan. We can even find them in the walls of buildings in Amman, which are of limestone. The Eastern Desert areas as well as the numerous lateral valleys are very rich in fossils of all kinds: fishes, urchins, shells, as well as of primitive creatures, birds, reptiles, marine mammals and even dinosaurs, as well as corals.

We can also find deposits of fossilized sand with imprint of water movement, as for example the fossilized ripples in the desert Mudawwara in the southeast of Jordan.

However, we can also see yet a lot of unusual mineral formations which look like fossils, but in reality are not. For instance, the dendrites, which can be widely seen in the copper mines of Feynan: they look like fossilized algae but they result from manganese oxide or iron crystallized infiltration in the rock. 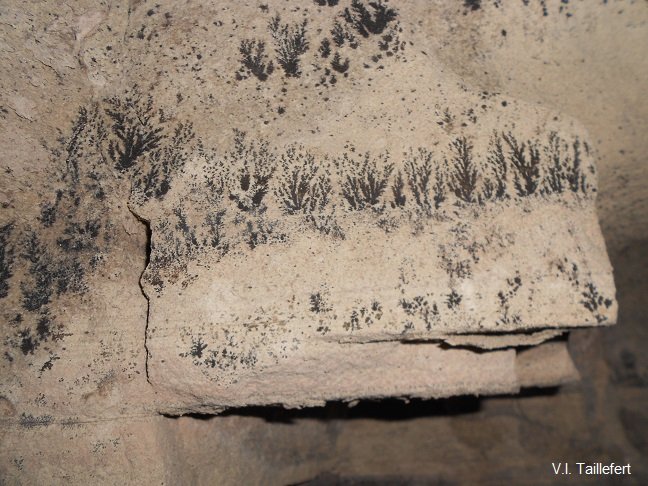 On the shores of Al Arab Lake in the north of Jordan, these formations seem to be petrified tree trunks. They are in fact Liesegang rings. The iron present in the soft rock oxidized under the infiltration of water and broke down the material into concentric rings.

Concretions are masses of sedimentary rocks formed around a mineral kernel by the precipitation of mineral cement.  This cementation makes the formation hard and resistant against the wear of time. Concretions are often spherical or ovoid, although irregular shapes also occur. We can see spot some of them on the Eastern Desert ground.

These formations are usually the work of wind erosion combined with the chemical composition of the stone: the brittle layers, most of the time sedimentary, are headed up by another layer of rock, more resistant to the effects of erosion. Hoodoos can be mostly seen in the lateral wadies, however the Wadi Dahek contains the most beautiful specimens (left below). The right below photo shows a "mushroom" is located in Wadi Feynan. It is due to the presence of silica which is pulled up to the surface of the block when the humidity infiltrated in the soft sandstone evaporates.  The top of the rock harder than its base. The flow of water and the wind erode the base while the top of the rock is maintained, shaped like a plateau.

A crater of 6 km in diameter has recently been discovered by scientists at the University of Jordan in the Eastern Desert, 200 km east of Kerak, between the road linking Azraq to Ma’an and the Saudi border ( GPS 31.0463O , 36.8062O ). The crater consists of two concentric circles: the first one is 5.5 km in diameter and the smaller one 2.7 km in diameter. According to scientists, it is the result of an impact by a meteorite estimated to be 100 m in diameter hurtling at a speed of 40-50 km/second. The force of the impact is estimated to be 5,000 times the force of the Hiroshima bomb and would have thrust millions of tons of rock and dust into the atmosphere, causing a cloud that would have enveloped the whole planet. The age of the crater still has to be determined, but it seems to be relatively young, less than 34 million of years. It is the largest crater and the youngest one in the Middle East. Rock concretions were baked by the impact and chert melted. The impact also brought to the surface layers of rocks that were normally situated 300 m below the ground level.  Those layers brought to the surface form the central uplift.

Crystals are usually formed by minerals that melted under heat and then slowly cooled down, so that atoms organized into geometric and regular patterns. They may also appear when water evaporation induces a crystallization. The most common crystal in Jordan is the quartz that we can find sometimes between rocky layers or encrusted in the rock.