A fortunate discovery at Beit-Ras 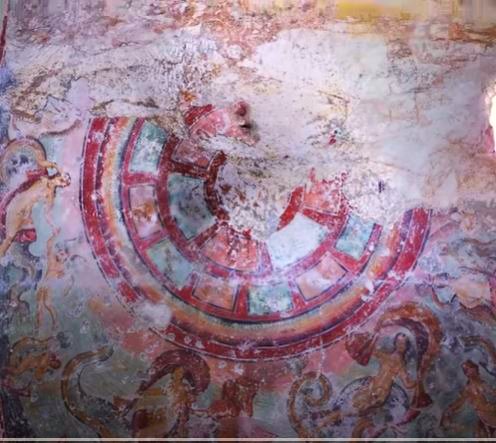 In late 2016 an extraordinary discovery accidentally occurred in a street of Beit Ras, an agglomeration located 5 km north to Irbid. On the occasion of roadworks, a mechanical shovel unearthed a wide Roman tomb hewn in the bedrock, with a whole panel of wall paintings representing all the aspects of the everyday life of a city at the Roman time. An exceptional testimony, subject to an immediate survey and emergency conservation measures that involved the local community. 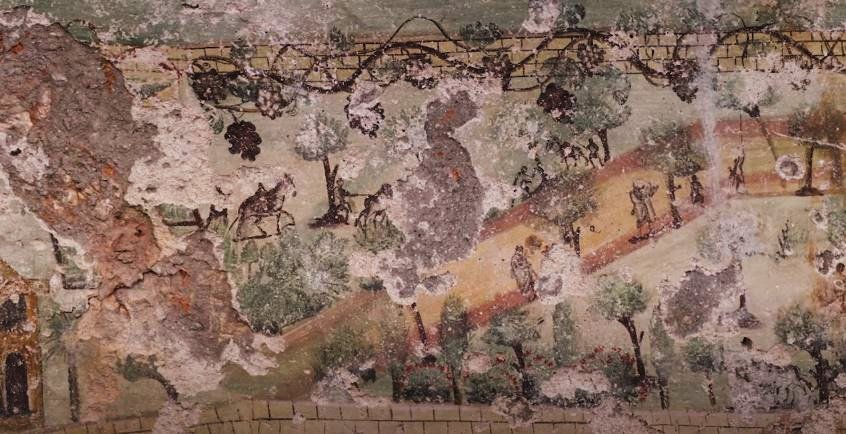 The antic city of Beit Ras was named Capitolias, after an epithet attributed to the Greco-Roman divinity Zeus / Jupiter Capitolias. The archaeological researches suggest that the city was founded at the end of the 1st century AD, in accordance to coins minted by the city. Capitolias was a included in the Decapolis league and was probably an important city, although the nowadays site is far from competing with Jerash or Um Qais, as few of it has been unearthed: the modern settlement is build over the antic one, a phenomenon that limits the archaeological exploration (see photo below right, the vestiges of the Roman forum). The main visible structures consists in a large theatre that is still waiting for restoration, but also some remains of a temple, a colonnaded street, a marketplace, a city wall dating to the 2nd century, and a Byzantine church converted to a mosque. From the foundation process, the city was planned to be a Roman town, perhaps for military purposes. Thus, Capitolias is not a settlement that evolved to a romanized city. Many local citizens served in the Roman army which was in charge with the protection of the Roman empire's eastern limits. The city had also an important industrial activity, with pot and glass manufactures as well as a wine production, attested by the winery installations and abundant finds of wine jars. During the Christian period, Capitolias was a bishopric seat and was represented at the Council of Nicea in 325 AD. The city maintained its prevalence till the Umayyad period.

The tomb belongs to a necropolis located east to the theatre. The date was firstly estimated between the 1st and the 3rd century AD and is almost intact. It is approximately oriented to the cardinal points. It consists in two chambers augmented with an annexed burial space containing an acrosolium.  The monument stretches over 60 sq meters. It is thought to have been originally the burial place of a highly estimated Roman dignitary. A basalt sarcophagus was found inside the first room, in a excellent state of conservation. The remains of not less than 24 individuals have been discovered in the hypogeum: 10 in the sarcophagus and 14 in a small tomb of the second room. The ongoing analysis has shown so far that the tomb was used over a period from the 1st till the 5th century. Ornamental artifacts have been found, as well as cloths.

The iconography depicted on the walls and the ceilings of the chambers is extremely rich and detailed with numerous figures of gods, humans and animals. No such example has been uncovered so far. We recognize mythological scenes, banqueting, rituals, but also the human common activities of handcrafting, farming, harvesting, construction works with material transporting, stone cutting, masonry... and even accidents! On the ceiling are represented the marine and celestial worlds with a zodiac.

The consideration of the representations in a whole leaded the scholars to understand that what is depicted in this tomb is related to the foundation of the city. In the Greco-Roman world, the birth and development of a city is always supported by a founding myth that gives it legitimacy. However, in most of cases, those myths remained an oral tradition that got lost over time. Beit Ras tomb's frescoes could be a unique testimony of a depicted founding myth, involving the mythological scenes, rituals and humans works, as well as an extended spacial dimension between the heaven and the ocean that confers to the city a position within the universe. 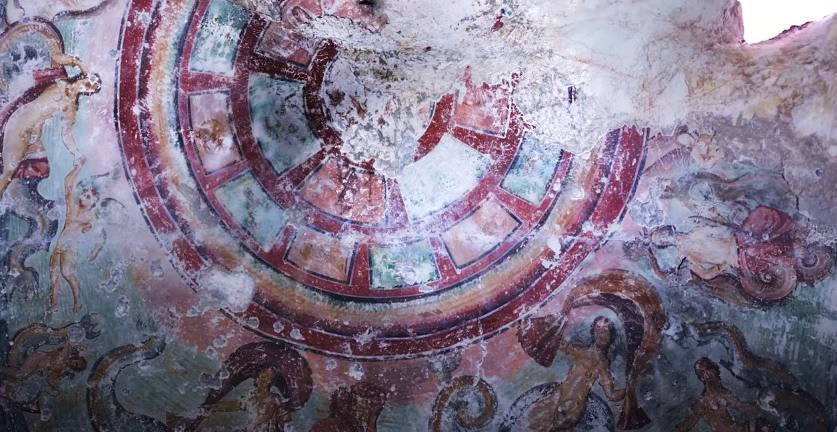 The frescoes narrate the city foundation process in six sequences, with a logical interconnection: the gods, who preside the creation of the city, lend a hand to the human who, in turn, proceed to rituals towards the gods.  The large space given to the rural activities lets appear the prevalence of the agrarian social background and environment over which the city developed. It is possible that the Roman dignitary, whom the hypogeum has been built for, is represented proceeding to a sacrifice on one of the frescoes. Therefore, we can suggest that the tomb hosted the burial of one of the founders of the city. 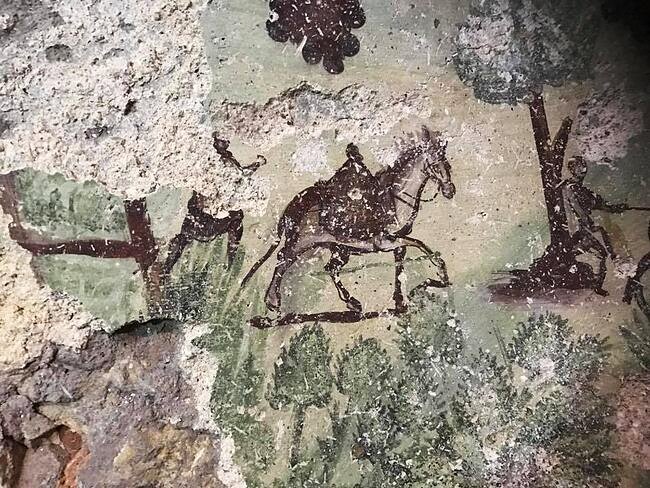 More than 60 inscriptions accompany and describe the scenes. While written with Greek alphabet, those texts are in a local variant of Aramaic. This kind of discovery is precious to the scholars and it constitutes a valuable support for studying of the pronunciation and the evolution of the ancient Aramaic. Here below an example of inscriptions scattered inside the scenes: we effectively we recognize Semitic roots under the Greek letters: 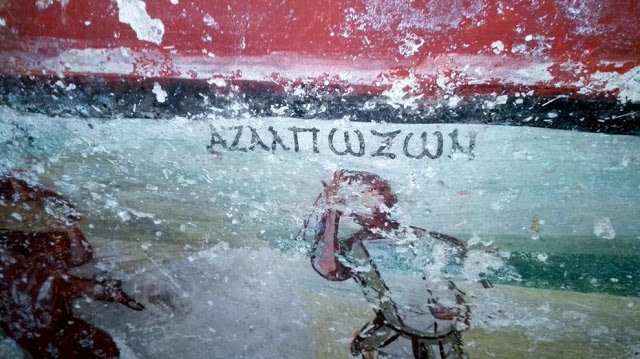 The tomb is still under survey and restoration. It is expected to be open to the public in the future...

Science in Poland: Polish archaeologists in the ancient city of Jupiter Capitolinus https://scienceinpoland.pap.pl/en/news/news%2C403058%2Cpolish-archaeologists-in-the-ancient-city-of-jupiter-capitolinus.html