Many fortresses in the Eastern Desert defined the oriental borders of the Roman and Byzantine empires. They were organized in a "chain" in order to protect the empire from invasions. After the Muslim conquest,  these edifices lost their military function and were converted to different purposes. Some were used by the Omayyad aristocracy, whose members found in these remote areas calm, rest and leisure, while other became caravansaries on the pilgrimage routes that run through the Eastern Desert, in parallel to the roads following a more western itinerary.Each castle is unique. The usual tourist itinerary gives an opportunity to visit at least three of them:

The Castle of Kharaneh’s function has never been identified with certainty. It was probably erected in the 8th century over the foundations of an ancient Roman or Byzantine fort. It consist in  impressive walls flanked with towers and including archer loops. The building contains an indoor central courtyard surrounded by a large number of rooms distributed on two floors, in which some of the decorations do not seem to be of a military style. Kharaneh Castle remains an enigma

The Baths of Amra is a group of buildings that were once used as a residence by the Omayyad rulers. A crops farm extended to the south of the complex. Amra Baths are located in the wadi Butum,  that benefit from winter rains flows in an arid environment. Like Kharaneh Castle , Amra Baths were built in the 8th century by Caliph Walid the First. The baths were supplied by a mechanic hydraulic system and a well. Amra Baths are characterized by frescoes, a unique vestige of the Omayyad paintings, so that Amra Castle is registered as an UNESCO World Heritage site. Although the frescoes date to the early Muslim period, their motives reproduce the previous antic art with a certain freedom of expression. 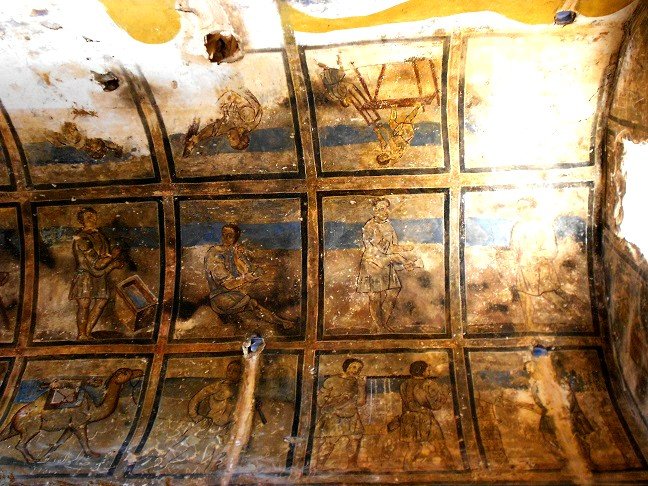 With Azraq Castle, the scenery changes drastically. We discover a black basalt military fort, which kept its function until the time of Lawrence of Arabia who used it for his headquarters. The fortress also served as a safe haven for the Druze families who emigrated to Azraq from southern Syria in 1926. The structure of the fortress is very simple, based on the model of the Roman forts: a square complex flanked with four towers and a courtyard surrounded by many rooms, some of which were stables. In the middle of the courtyard a small mosque was built apparently during the Omayyad period . Because wood was not available, the builders used a thousands years old technique typical of in the Hauran region for building the ceiling and the upper floors, the "corbelling": slabbed flagstones are arranged as beams on stone lips. Another particularity of the Hauran architecture is the outdoor stairs build with flagstones integrated in the walls.