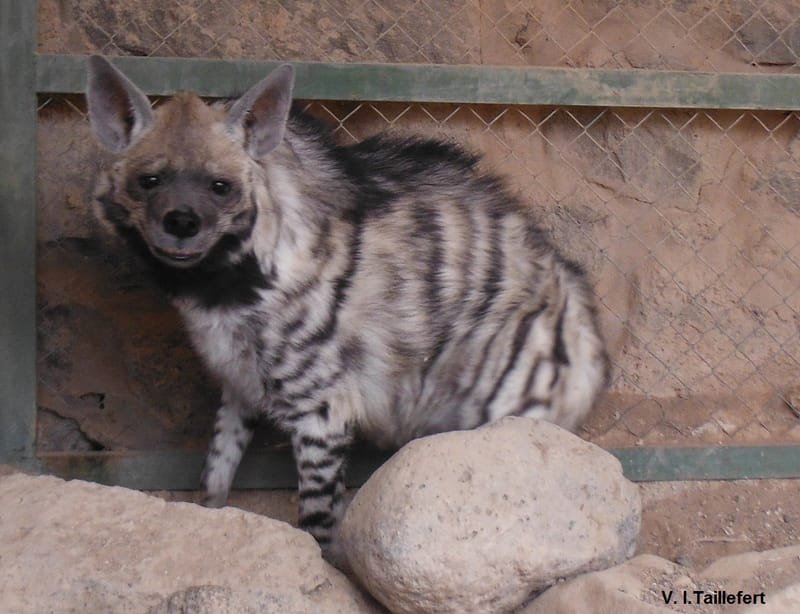 This hyena has a beige fur with strips, a lighter abdomen and a black throat. Its declining backwards back is coated with fur that can ruffle. Its neck is covered with a little mane. Its very developed jaw allows crushing carcasses and shells. Its height at the withers is 80 cm. The hyena lives isolated or in familial groups, its diet is omnivore with carcasses...

...small mammals, birds, fruits and plants. It finds shelter in rocky cavities. It is spread all over Jordan, but especially in the mountainous desert areas over the Wadi Araba and the Dead Sea and Eastern desert wadies as the Wadi Rajil.

The opposite photo was taken at Badia Center for Ecological Education.

The Hyena looks terrifying. Its jaw is extremely powerful in order to break the strongest bones and there is no doubt that it is able to shred its victims. The Hyena emits a powerful and grave rumble, like a powerful motor. It can also be heard giggling at the bottom of a cave. The Hyena is mostly nocturnal, but not exclusively.

In view of the great fear that it inspires to men, the Hyena was unjustly killed and is now endangered.  The Bedouins fear her above all. They use to say the following about it :

It is told that a hyena, confronted with a human, will try to urinate on him. The urine would have haunting properties that would drive the man mad.  Under the effect of these psychotropic properties, the man would claim that the hyena is his friend and that he must go to join it in its den. The enchantment would be so powerful that it is necessary to restrain the man by force, otherwise the unfortunate would go to the lodging of the animal where he would of course be devoured. Some Bedouins can certify that people in their families have experienced this mesmerizing effect of hyena urine, which of course could not be scientifically proven. However, in North Africa there are parallel beliefs that the hyena would anesthetize men with her urine and then devour them.

Anyway, the Hyena is a dangerous animal even to humans. Under certain conditions, it can attack. The Bedouins say that in this situation, the person has to undress and abandon the clothes to the animal.