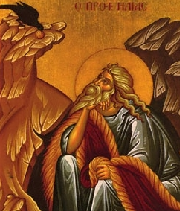 The prophet Elijah lived in the 9th century BC. He is native from the mountains situated near Ajloun, specifically from the region of Listib. This place corresponds to Tishbe in the Bible, and perhaps to the village of Wahadneh today. Elijah did not stay in his homeland, but traveled extensively throughout the region. He focused his efforts on trying to convince Ashab, king of Israel, to..

abandon the pagan cults. He also led a hermit lifestyle, and is told to have lived by the brook Cherith (a torrent which flows into the Jordan River, probably in one of the side wadis on the eastern side of the valley, maybe the present wadi Yabis which prolongs the Wadi Rayan), where the crows came to feed him every morning and evening. An imposing church was built at the Byzantine period on one of the hills surrounding the alleged place of Elijah’s birth. It is one of the largest churches in Jordan, with a beautiful mosaic floor (now covered with sand for preservation purpose). Prophet Elijah is still revered today in this place and we can see on the site the religious images, the remains of wax candles, and especially the votive ribbons hanging from the branches of a tree that has grown within the heart of the church.

At the bottom of the hill, there is also a small old mosque, that was recently renovated. It is located next to the ruins of a small village, established probably during the Muslim period. Other remains of churches were discovered in the surroundings. This quiet and bucolic place is perfect for meditation. The pilgrim will enjoy stopping there and re-energizing.

If Transjordan is Elijah’s birth place, it is also the place of his disappearance, as he was taken away by a fire chariot following the biblical account. According to both the Bible and the tradition that followed, this extraordinary episode took place in front of Jericho, on the east bank of the Jordan river. Elijah crossed the river by hitting the water with his coat. When John the Baptist came to settle on the site that will later become Bethany, he just came to the location where, according to tradition, Elijah disappeared. This place is the small hill of the Wadi Kharrar, where we can see a continuity of settlement at John’s time. Moreover, for those who come to listen to John and to be baptized, this place is already commonly known as the one from where Elijah left in the fire chariot, as they wonder if John wouldn’t be actually Elijah who would be back. Therefore, Bethany is a twice sacred place, by the union of these two exceptional prophets.