Among the different types of natural dyes that were in used in the Middle East, indigo holds a special place. It is one of the oldest dyes used for textiles and printing. Indigo can be produced from different type of plants (about 300 kind of plants contain the indigotin, the basic chemical compound producing the blue color). Indeed,  several civilizations have independently developed indigo dyeing from different sources containing indigotin and we find evidences of it in all the ancient civilizations of the Near and Middle East, of India, of China and Japan, of Africa but also of Meso- and South America. 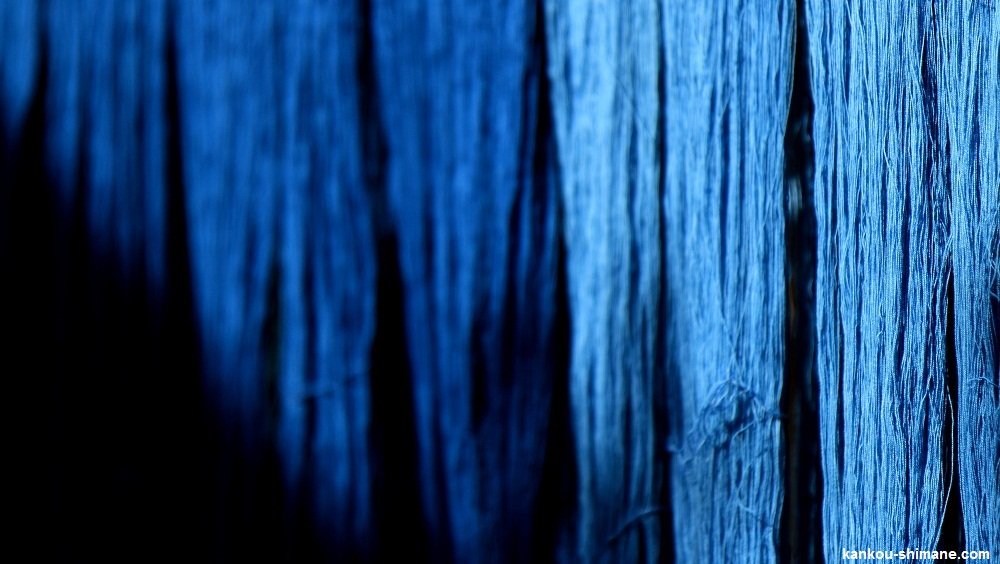 Until the emergence of the prosperous centuries of the Islamic Agricultural Revolution, The Middle East imported indigo from India, as it name suggests it (from Gr. indikon, meaning Indian). The modern Arabic keeps the name nil, from the Sanskrit nila meaning dark blue or darkness.   However, with the technological advances that occurred subsequently to the Islamic expansion in Asia, the cultivation of indigo was imported to the Middle East in order to also produce it locally. The crop was widespread in different areas of the Arab world, notably in Egypt and Yemen. The tropical climate of the Jordan Valley and the efficient irrigation network perfected through the agricultural technological progresses offered ideal conditions to the cultivation of indigo. The production of Baisan in the North of the Valley, of Jericho in the middle and Zoara ( Ar.Sughar) are well attested in the writing of the Arab scholars of the 10th to the 13th centuries. Indigo even became the main crop cultivated in the Jordan Valley.

Before being famous for its sugar industry, the city of Zoara, in the surroundings of the modern Safi village, was well known for its indigo production. The 10th century geographer Ibn Hawqal reports that the dye workers in Sughar were as numerous as those of Kabul even though the quality of the indigo dye was inferior. We know from Arab authors that two kind of plants were available, possibly the Isatis tinctoria (woad) and a species of Indigofera. However, it is likely that the Isatis tinctoria has been abandoned at the 10th century due to its poor quality. Today the common plant used to produce indigo is the Indigofera tinctoria, also called the true indigo.

The indigo industry  is an important precursor of  the sugar industry and played a role in the early steps sugar processing as it presents some similarities with it in the process as well as in the type of recipients. In the Levant, the indigo industry survived much beyond the sugar industry. The textiles of the Arab world represented a large portion of the exportations to Europe. From the Jordan Valley, several trade routes were available: to Cairo and the North Africa, to Gaza and through the Mediterannean sea, to Damascus and Istanbul. In the modern textile industry, many fabrics names have their origin directly from the Arab world: the damask (from Damascus), the muslin (from Mosul), the gauze (from Gaza), the baudekin (from Bagdad), the cotton (Ar. qutun), the satin (Ar. zaytuni, from zaytun meaning olive), the taffeta (Ar. tafta), the mohair (Ar. mukhayyar)...

Indigo cultivation was still a very common production of the Jordan Valley at the 19th century, but started declining, as in general the local agriculture in the whole area, affected by an external bureaucratic oppression, the exploitation of the peasantry and the degeneration of the whole farming system crumbling, following the report of the 19th century travelers, under the inefficiency and the corruption of the governmental Ottoman authority. However, indigo was still alive till the beginning of the 20th century and the Southern end of the Dead Sea was known as one of the best place for its production. It is the entry of the synthetic indigo on to the markets that fatally damaged this traditional industry. Only few workshops are still known in Syria and the end of the 20th century. 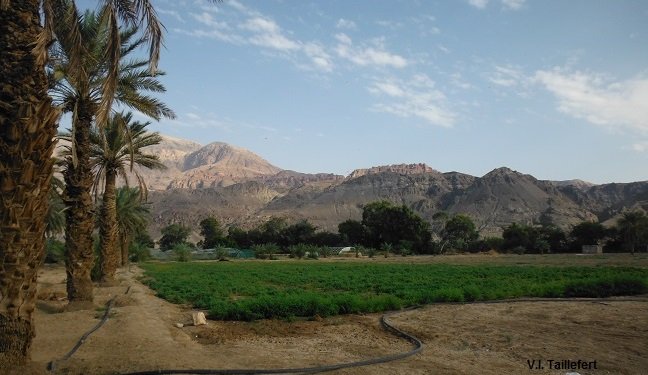 In Ghawr Safi, the modern village located in the area of the ancient Zoara/Sughar, a project initiated by a local women cooperative revives the indigo dyeing. Indigofera tinctoria seeds have been brought from from India. 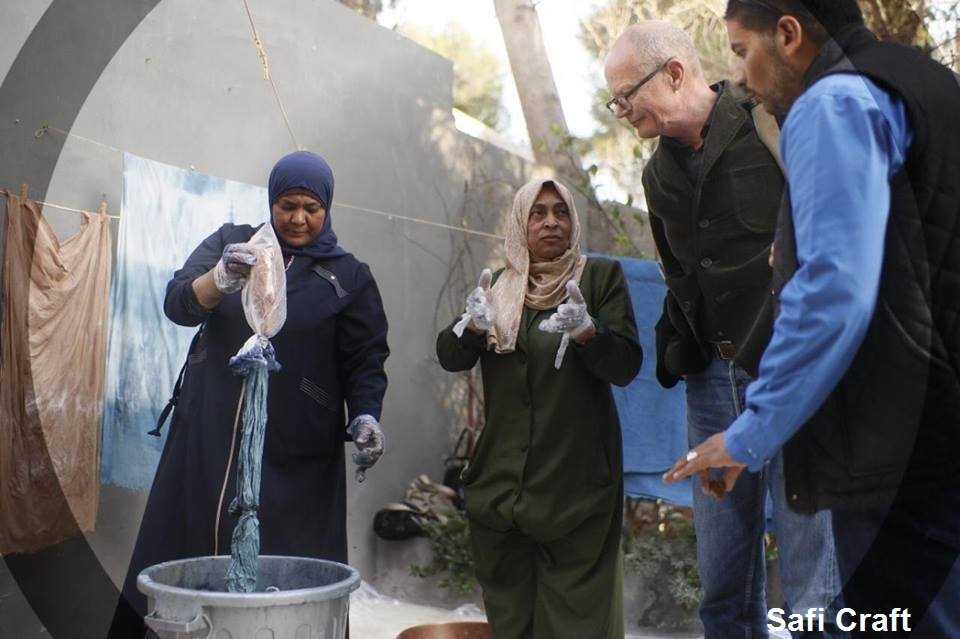 This shrub belongs to the bean family, has green pinnate leaves and pink flowers. It can grow till 2 m high. It can provide annual, biennal or perennial yields depending on the climate. In Ghawr Safi, the harvest occurs twice yearly.

The extraction of indigo can be done through two different processes: by drying indigo leaves and crushing them into a powder that will be then diluted into water or by soaking directly fresh leaves. It is this second option that is implemented in Ghawr Safi, following the traditional method still in use today in India.The indigo craftspeople keep discrete on some details of the process, however, roughly speaking, indigo is extracted by the following steps:

The dyeing process is chemically the reversed procedure of the extraction: the pigment, which is basically not water soluble, must be dissolved in water without input of oxygen in order it can penetrate the fiber that will become blue only once exposed again to oxygen. In order to dissolve indigo powder, it is necessary to make enter other substances in the dyeing process. One can to use 100% natural products, as honey, dates... but they are slower than chemical reduction. Each workshop has its recipe. In the past, camel urine was also used. The dissolution of the pigment make the water again yellowish, that we called at that step leuco-indigo (white indigo). This dissolution allows the pigment to penetrate deeply in the fiber. When the cloth is taken out of this water, it will still appears yellowish, but at the contact with oxygen it will quickly turn into greenish and then into blue. Repeating the bath will result in a plus or less dark color.

In the past, indigo was a color of luxury, expensive and very valuable. The Blue Jeans (Blue of Genoa) popularized and globalized the indigo blue. However, the indigo color is not limited to the jeans shade. It represents a range of color from the light blue to the violet and purple.  Indigo has mosquito repelling properties and helps reduce perspiration. Those properties explain why it is especially appreciated by the African countries dwellers as the Touareg and the Sub-Saharan populations.